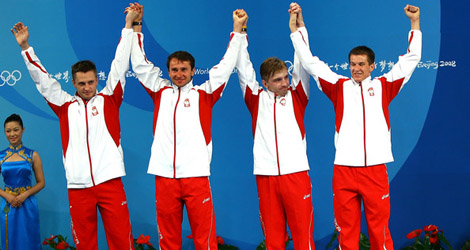 The 2012 Summer Olympics opens on July 27 in London, and the Polish delegation looks poised to improve on their lacklustre haul of 10 medals at the 2008 games in Beijing.

The nation’s success in London will hinge largely on the performance of their celebrated men’s indoor volleyball team, which has a serious chance to take Olympic gold. Andrea Anastasi’s squad has been building momentum in recent months. The team claimed silver in last winter’s World Cup, an Olympic qualification event, and took gold at this year’s World League after finishing 3rd overall in 2011. Although men’s volleyball is the only team competition featuring Poland at these Olympics, there are a number of other performers who are considered favourites in their respective events.

In track and field, 30-year old Tomasz Majewski is the reigning gold medalist shot putter, although he hasn’t won a major competition since 2009, despite a string of podium finishes. In the discus competition, Piotr Małachowski was the silver medalist at the 2008 games and is the current European champion. Poland also has a pair of contending middle distance runners in Marcin Lewandowski and Adam Kszczot, both of whom have taken gold in the 800 metres at recent European championships.

Among Krakow citizens, Agnieszka Radwańska appears to have the best hope of bringing home a medal. In addition to women’s singles, the WTA’s no. 3 player is also expected to team up with her younger sister Urszula in the doubles event. The tennis competition will take place at the All England Club only three weeks after the completion of the Wimbledon Championships.

A number of Polish weightlifters are expected to collect medals in London. Foremost among them is Adrian Zieliński, the 2010 world champion in the 85kg class. At 22 years old, he will be competing in his first Olympics. Not to be outdone, Marcin Dołęga is a three-time world champion in the 105kg class as he looks to erase the memory of coming fourth in Beijing. On the women’s side, Marzena Karpińska and Aleksandra Klejnowska are two European title-holders vying for medals.

Elsewhere on the programme, Maja Włoszczowska is a co-favourite in mountain biking after her silver medal ride in 2008. The 28-year old claimed the world championship in 2010 and followed it with a runner-up finish last year. In addition, Poland has several athletes attempting to become repeat medalists in rowing, canoeing and fencing.

One thought on “Poland’s Olympic Hopefuls for London 2012”