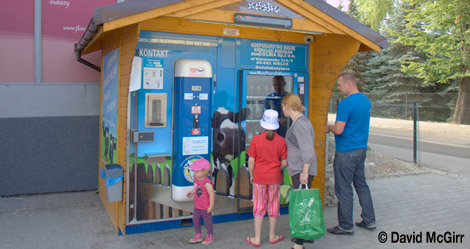 The sign on the machines says: ‘Milk straight from the cow’ – but don’t worry, the cows remain at home on their farm in Jędrzejów; it’s only the milk that’s inside the machines.

These are the first two ‘Mlekomats’ in Krakow, at Nowy Kleparz and Borek Fałęcki. They contain milk from the Jędrzejów herd of cows, which can be bought, bottle and all, in minutes.

The bottles cost a złoty for the smallest, and to fill them costs 2ł (0.5l) or 3.50zł (1l). The milk is unpasteurised and over four per cent fat.

A spokesman for the firm EcoDolina, which is behind the machines, said two more were planned for Krakow. They will be in Kazimierz, and Wola Justowska.