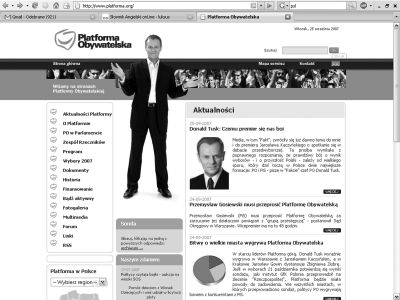 Currently, 37 percent of adult Poles use the Internet, which is 6-percent more than it was in the first half of 2006, according to the Warsaw-based Center for Public Opinion Research. Because of this statistic, the Internet may play a key role in the political campaign for Polish parliament in the fall of 2007.

The Internet is a perfect medium for candidates to present their opinions, develop their political identity, address their position and concerns on certain issues, and to raise the funds necessary to win an election. Being a very personal form of interaction, the Internet is beginning to be a necessary tool for campaigning on all levels. Although political parties were present on the Internet during the last election, this year there will be much more revenue from political advertisements than ever before.

Ronald Reagan, 40th president of the U.S. (1981-1989) proclaimed in 1989, “The communication’s revolution will be the greatest force for the advancement of human freedom that the world has ever known.” The way that people bank, shop, work, and even exercise has been affected by today’s advancement in technology. Political campaigns cannot be immune to this new way of life.

“Blogging,” where entries are written in chronological order and commonly displayed in reverse chronological order, has also become an essential part of political marketing. Many blogs provide commentary or news concerning particular subjects such as politics or local news. In the political world, parties are hiring bloggers to write and submit articles on behalf of their “independent” blogs. Poland will soon follow suit.

Unfortunately, there have been cases where provocateurs hidden under nicknames are slandering other parties’ candidates. More and more aggressive entries have appeared in commentaries and complaints on the discussion forums, resulting in authors finding themselves in court more often. The use of the Internet for negative campaigning has succeeded and those committing libel cannot be punished due to their anonymity.

One thought on “Internet plays role in current political campaigns”