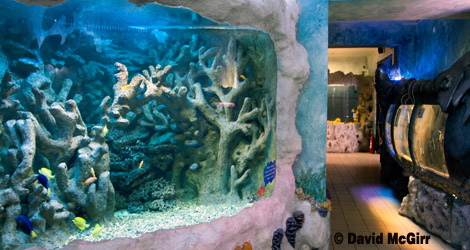 It used to be a major attraction for tourists and locals, where visitors could marvel at an underwater world and come face to face with exotic creatures. But now Krakow’s aquarium has closed – after the owner lost a legal battle with his landlords.

Local media in Krakow reported that the Aquarium at ul. Sebastiana had almost been ‘razed to the ground’ as American owner Nathan Gendreau, who also runs a chain of hostels, dismantled the facility and removed aquariums and fittings ahead of eviction on June 18.

Nasze Miasto reported that the bailiff who attended the site to supervise the eviction, accompanied by police, said: “I was amazed at the level of damage. The exhibition has been devastated.”

The newspaper Gazeta Krakowska said the Polish Academy of Sciences, which owns the building, asked a court to evict Mr Gendreau, claiming that he had damaged the premises and owed 500,000zł in rent. The newspaper also reported that several animals – some rare or endangered – had been left unattended in the shell of the former aquarium, and that they were being taken care of by a specialist firm.

Gazeta Wyborcza said that the aquarium looked like it had been bombed when the bailiff arrived. The newspaper reported that animals had been ‘trapped in this hell’ of plaster, broken glass and cables, and that its journalists had to be guided around the site by torchlight because there was no electricity.

The newspaper asked why Mr Gendreau had dismantled the aquarium before all the animals had been removed, and reports that he had asked for more time to renegotiate, but did not get it.

Mr Gendreau told Polish reporters that destruction of the facility had not been his intention. He said that he needed to move the aquariums at short notice, so had to dismantle them quickly.

He also said that his animals had been well-cared for, and had been fed to prepare them for their journey from the attraction.

He added that there had been an agreement that he could used the premises as an aquarium, that no rent was due and that the claim that the building had been ‘devastated’ was ‘an extreme lie.’

Mr Gendreau wrote that he had spent 5 million zł on the aquarium since 2007, and that 30 people employed there would lose their jobs.

He added: “Taking away the aquarium from the people of Poland is criminal to say the least… This is a completely unique project in Poland and there is nothing like it. When it is gone the children will lose the most; Krakow is not a very family friendly city, with very few options on a rainy day to entertain your children.”

5 thoughts on “Krakow Aquarium ‘looked like it had been bombed’”