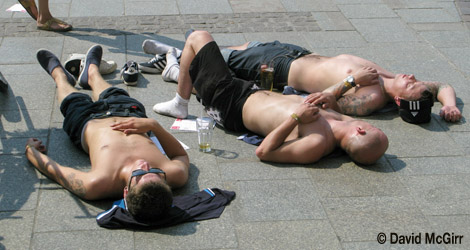 Six-pack or paunch, waxed or natural… men going shirtless in the city have sparked a massive debate in the local press.

As summer set in and folk began shedding clothes to stay cool, the terraces outside cafes and bars in the city centre were engulfed by unclad exhibitions of the male torso, in all its forms. The newspaper Gazeta Krakowska opened a poll on the subject – and immediately got a flood of responses.

One woman, calling herself ‘Bianka’, wrote ‘A man without a shirt in a public place shows a simple lack of culture’. Another, ‘Iwona’, wrote ‘This is not a private garden plot’, and a further, writing under the moniker ‘Disgusted’, said ‘Your appearance betrays you and your culture.’

These views were prevalent, supported by 41 per cent of those who took part in the poll. Around 32 per cent said that, although the flesh on display might not always look great, there should be no law banning it.… but 27 per cent defended the right to bare arms and chests.

Many who called for men to cover up regardless of the weather were, admittedly, approaching the issue from a somewhat aesthetic point of view. ‘Sylwia’ wrote ‘I would gladly gaze upon a beautifully sculptured torso – but not the belly of a fat old guy drenched in sweat.’

One voter in support of the bare-chested brigade posted a comeback to the aesthetic argument, writing simply ‘Think about what you write – do I live in a monastery? I’m well-built, but even if I had a tummy, that’s my business how I look. If someone doesn’t like it, they don’t have to look.’

Marek Anioł, of the Krakow city guard, said there was no law forbidding men to go topless in public. But that was not the same for women, he added.

Mr Anioł told Gazeta Krakowska: “The case is difficult because it comes down to indecent behaviour. Men can go shirtless in public, unless they commit any offences. But a woman with exposed breasts can be threatened with court, or fined 50-100zł.”

Readers had responses to this issue too. ‘Mnich’ wrote ‘I did not know that you can punish a woman going topless. This country is even stranger than I thought.’

The voter ‘Tur’ added ‘I think that it is scandalous that women are penalised for going topless in the city. We need this as soon as possible!’

9 thoughts on “Shirts off for Summer? Have Your Say…”