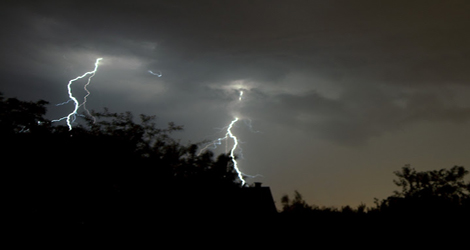 Krakow sweltered, or rather roasted, under a week of dry heat before a storm finally broke on Tuesday evening – bringing with it a spectacular light show. The good news is that it doesn’t signal the end of summer; forecasters are predicting that the temperature will remain in the 30s until at least the weekend. However, the air should become a little more breathable over the coming days, with more sporadic storms on the way.

It’s a marked difference from just six months ago. Then, winter plunged the city into an ice box, and temperatures fell to 25 degrees below zero. This week, when it reached close to 35 above, has been around 60 degrees Centigrade warmer.

Krakow Post photographer David McGirr donned his best rubber-soled shoes to snatch this picture as the storm rolled in.