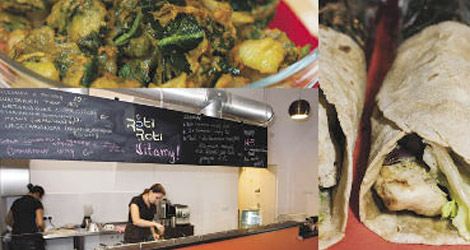 Get yourself down to the pub and party heart of Krakow for a taste of the orient. Kazimierz is heaven if you like grungy bars and a wild and sweaty music scene, but it’s also home to the city’s most authentic Indian restaurant.

RotiRoti Indian Cafe is a tasty rarity in Poland, a country that has not yet fallen in love with the cuisine of the subcontinent. It specialises in utterly authentic Indian street food, and maintains a slick and modern image rather than the flock wallpaper and sitar music you might be used to.

As the name suggests, the roti is the cafe’s signature offering. This flat bread is ubiquitous in South Asia and can be stuffed with all manner of delicious treats. As owner Konrad Job points out: “It’s Indian street food… this is how millions of Indians and Pakistanis eat every day – on the street, on the go, using the traditional bread and their fingers rather than knives, forks and plates.”

You can take a seat in RotiRoti’s colourful dining room, or take your food to go. A stuffed roti costs just 12zł and filling options include chilli pork, chicken palak and chicken tikka. A vegetarian version will set you back only 10zł.

Also on the menu are spicy soups, irresistible pakora, samosas and salads ranging in price from 5 to 8zł. And to wash it all down, sweet and mango lassi or a steaming mug of genuine masala chai (5zł).