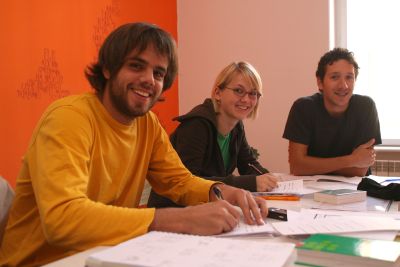 More and more foreigners are learning Polish in Krakow. Most are from Europe but “we have had students from Asia, Africa and South America, too,” said Anna Kulasik, a teacher at the Inter Lang & Text school.

Much of the interest in learning the language is connected with Poland’s entry into the EU. Many international students decide to learn Polish while taking other courses.

Andrea, a 24-year-old student from Bologna, came to Poland under the Erasmus exchange program to study political science at Jagiellonian University. He wasn’t required to take Polish as part of his studies but wanted to learn it. “All in all I really enjoy speaking Polish, and I want to continue learning it when I am back home in Italy,” he said.

Another sizable contingent of language students is international-company managers, some of whose companies require them to learn Polish. But, unlike students, managers usually prefer individual lessons to group classes. A number of people who visited Krakow as tourists liked the city and decided to stay and learn the language.

Another sizable group of language students is men with Polish wives or girlfriends. “Once we had a student from Switzerland who said he always wanted to learn some exotic language,” said Ola Goldyn of the Varia Center of Polish Language. “He was thinking about Chinese but finally he decided on Polish.”

Martin, a 25-year-old Austrian, is in Krakow for a three-month-long internship. “I found the Polish language very interesting and I decided to learn it,” he explained. After two months of hard study he can already communicate in Polish. His teacher, Goldyn, said the school focuses on conversation rather than grammar. The staff teaches Polish “in real-life situations,” she said. “That’s why classes are held not only in lecture rooms but also in pubs, on cycling trips, tours around museums or hiking in the mountains. Learning Polish shouldn’t be boring.”

In addition to the regular curriculum, the school offers two-week intensive courses in summer. Students are provided with accommodations and an interesting cultural program. “We combine teaching with enjoyment and sightseeing,” Goldyn said. “If we take our students for a trip, we encourage them to practice newly acquired vocabulary in everyday situations. It’s the best way to learn to speak Polish.”

Teachers say two to three months is enough for students to obtain “survival Polish.” “That means they can go shopping, ask questions or introduce themselves,” said Anna Kulasik of Inter Lang & Text. But if they want to speak Polish well, at least one year of hard study is necessary.

What is the biggest problem for students trying to learn the language? Most say pronunciation. Many find some grammatical rules absurd. But surprisingly, foreigners often have fewer problems with grammar than native Poles. Another problem can be discouragement. “People are usually very enthusiastic at the beginning but many become disheartened when they realize they must expend a lot of effort to learn Polish,” Kulasik said. “But if they don’t lose their enthusiasm after the first few lessons, they should be all right.”