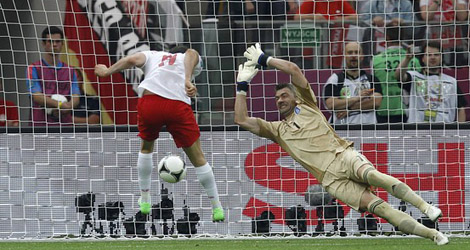 The Polish national team played Greece to an entertaining 1-1 draw in the opening match of Euro 2012 Friday in Warsaw. Backup goalkeeper Przemysław Tytoń emerged as the hero of the night, coming cold off the bench to save a 2nd half penalty, and rescuing a point for the Poles in Group A.

Borussia Dortmund striker Robert Lewandowski connected on a diving header in the 17th minute to inaugurate the tournament’s score line. Following an undeserved red card for Sokratis Papastathopoulos late in the half, the Poles appeared to be in control.

However, the match turned after halftime beginning with the equaliser by Dimitris Salpingidis in the 51st minute and the subsequent sending off of Polish goalkeeper Wojciech Szczęsny.

In dire straits, Polish manager Franciszek Smuda called Tytoń off the bench to save a penalty kick that is certain to go down in Polish football lore, particularly if the side manages to advance out of Group A.

In order to reach the knockout rounds, Poland will need a result against a Russian side brimming with confidence after dismantling the Czech Republic 4-1 in Wrocław.

One thought on “Penalty Save Keeps Poland’s Hopes Alive”