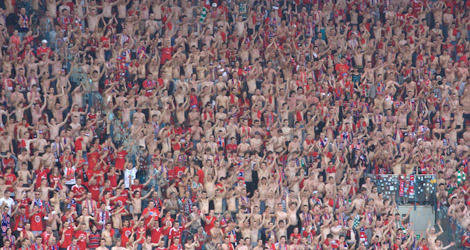 The England team are due to visit the former Nazi Auschwitz–Birkenau extermination camps today. Also on their schedule is a trip to the Schindler Factory in Krakow – the inspiration for Spielberg’s blockbuster Schindler’s List.

It is vitally important that high-profile figures continue to visit these sites – they must remain present in our minds and be introduced to the younger generation – but I suggest that efforts should also be made to drag the international media to the places in Poland where Jewish life is thriving again.

There is a prime example just minutes from England’s base in Krakow’s Old Town. Established in 2008, the Jewish Community Centre has become the beating heart of a resurgence of Jewish life in the city.

Following the alarmist and overstated allegations of anti-Semitism in Poland made by the BBC documentary Stadiums of Hate, a chat with the director and community at the JCC would go a long way to setting the record straight.

The Krakow Post has spoken to JCC director Jonathan Ornstein several times in the past four years, and on each occasion his message has been that Krakow’s Jewish community feels safe and accepted.

I’m sure the JCC would be happy to receive guests. Its doors are always open to locals and visitors of all faiths, many of whom pop in for its social events or to take classes ranging from belly dancing to Hebrew.

Mr Ornstein is more than willing to talk to the media, surprisingly perhaps given his poor treatment at the hands of the BBC. In a statement to the Economist, he said:

“As an American-born Jew living happily and safely in Poland and working diligently to build Jewish life in that country, I am furious at the way the BBC has exploited me as a source. The organization used me and others to manipulate the serious subject of anti-Semitism for its own sensationalist agenda; in doing so, the BBC has insulted all Polish people and done a disservice to the growing, thriving Jewish community of Poland.”

Mr Ornstein also points out that the media would do well to talk to the two Israelis footballers who played for local team Wisła Krakow last season – hardly a choice of club that might be expected if Poland was really the cauldron of anti-Semitic hate it has been portrayed as.

There are racists in Poland, but they are a minority. The ears of every journalist and the eyes of every cameraman here to cover the Euros are straining for the evidence. And when, inevitably, some group of Cro-Magnons obliges them, they will go straight on the front page.

Of course this problem should be discussed, but, ladies and gentlemen of the press, let’s not hand the morons such an easy victory by inviting them to perform. To do so would be a serious disservice to our hosts, the Polish people.

8 thoughts on “Perspectives on Poland: Freeze the Racists Out of Euro 2012”