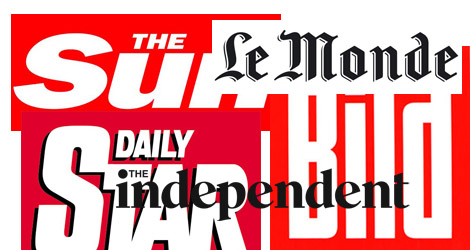 There’s only one place to begin this latest update on the Western media’s view of Euro 2012 Poland-Ukraine – and that’s the Krakow Post’s own article: “10 Tips for Staying Safe and Legal in Poland During the Euros”.

Front cover material in the Sun, it was also picked up by the Mirror, Mail and Guardian.  They all latched onto the Post’s advice that Polish police would come down on troublemakers (interestingly turned into “louts” in the Sun) “like a bag full of anvils”.  They also seemed to like the Post’s references to a “hi-tech sonic canon that makes victims wet themselves” and “a truck-mounted water cannon affectionately known as the ‘Typhoon’”.

I can understand why: with the notable exception of Northern Ireland, the UK has not been familiar with water-cannon and the like – so they have an exotic if menacing feel about them.  The papers were also intrigued by the lovely Krakow ladies intent on inviting you for a drink, only to sting you with a huge bill.  And dogs trained to bite you in the testicles: not sure if these are peculiar to Krakow, and I won’t be trying to find out any time soon.

The other big story is the recent BBC TV Panorama documentary “Stadiums of Hate”, exposing racism and violence amongst Polish and Ukrainian soccer fans.  This included video footage of disturbances at matches between Wisla and Cracovia, the so-called “Holy War”. But what did the media make of it?  Generally, they put the other side of the story; for example, CNN quotes a Poland foreign ministry spokesman who describes the programme as “cheap journalism” in which racism and anti-Semitism in Poland is “blown out of every possible proportion”.  There was a particularly telling intervention from Jonathan Ornstein, executive director of the Jewish Community Centre of Krakow.  In a letter to the Economist, Ornstein – who was interviewed for the programme by the BBC – explained how he put forward his view that racist football fans in Poland did not represent the Polish majority, only to be told by BBC reporters that this “didn’t fit their story”.

Unfortunately, the fall out from the documentary has run and run, culminating in the Sun’s claim that – shock! horror! – the England team’s Wives and Girlfriends (WAGs) are so “spooked” by the threat of racism in Poland and Ukraine they’ve hired a plane to fly to and from England matches without staying overnight.  I’d say a blessing for Krakow, where the WAGs were due to stay, though I’m not convinced local retailers will see it the same way.

In other news, the Daily Star screams: “Euro 2012 Shambles”- referring to the fact England fans who have paid nearly £100 a night for a luxury campsite known as “Pole Position” near the Wisla stadium in Krakow will be met with a “weed-ridden mud bowl” used by local tramps.  In better PR for the city – and the Netherlands – the Dutch team has donated its match bonuses to install football pitches for children in the Bronowice neighbourhood.

By the way, I did manage to catch the BBC Radio 4 programme, mentioned in my last Media Update, “Our Daily Bread”, which toured several European cities including Krakow looking at the historical importance of bread-making.  The section on Krakow essentially told how Polish bread helped keep a nation alive when Poland went off the map.  Let’s hope the Polish team have a good helping ahead of their and the tournament’s first match: Poland v Greece, 8 June, 18-00 local time.  Thereafter we’ll see what the Western media makes of these Euros, the build-up to which has surely been the most controversial and exciting ever.