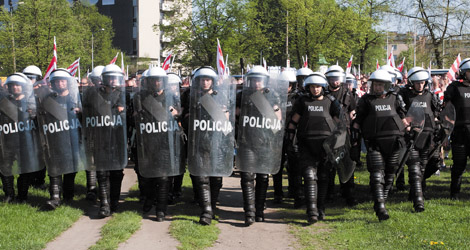 Polish police are well prepared for troublemakers at this summer’s Euro 2012 tournament. They have the equipment, the training and, most importantly, the experience.

Hooligan violence is nothing new in Poland. The keen rivalry between supporters of Krakow’s two biggest teams, Wisła and Cracovia, for example, has brought violence to the streets many times.

The Krakow Post went behind the scenes with the police as they prepared for a potentially explosive event in the Polish footballing calendar – the Wisła-Cracovia Derby.

A sophisticated intelligence-gathering and surveillance unit works closely with front-line riot squads to spot trouble before it happens, and to come down hard on lawbreakers.

When Euro 2012 begins, Polish anti-hooligan units will be joined by intelligence experts from participating nations.

The message is clear: Enjoy the matches and have a good time, but if the line is crossed, the boys in black are going to wrap it up in short order. 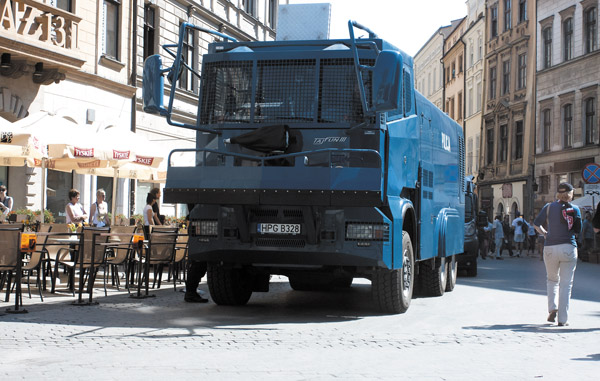 A Day Behind the Scenes With Krakow’s Anti-Hooligan Police

It’s an unseasonably hot day in April as members of Krakow’s Anti-Hooligan Crime Unit assemble at police headquarters for the start of a working day that will stretch long into the night.

There are 11 members of this undercover unit on duty today – a small but vital fraction of the 604 officers policing the match.

Their duties include monitoring the array of CCTV cameras in the stadium control room and carrying out covert surveillance of fans using hand held video cameras. They use these to identify agitators and ringleaders.

Intelligence suggests that Cracovia fans will gather in the Market Square and then march to the match in protest at a government crackdown on football fans.

There are also reports that fans will bring balaclavas, black jackets and dark glasses in an effort to frustrate efforts to identify them. Any fan covering their face today will be committing an offence under Polish law.

Wisła’s stadium has a capacity of 33,000, but only 1,000 tickets have been allocated for Cracovia fans.

Teams are required to provide police with a list of all ticket holders at least 24 hours before an away match, but the list arrives late. Officers work fast to compare the names to those with stadium bans, and find three matches – their details are circulated.

The undercover team, dressed casually in shorts and loose fitting shirts, are issued handcuffs and handguns. Video and still cameras are also distributed. Their unmarked vehicles are in the car park.

Also parked outside are half a dozen police riot vans. An officer of the riot squad (Oddziały Prewencji Policji) cradling a pump action shotgun sits in the open door of one.

His ammunition pouch is stuffed with rubber bullet rounds. Aimed at the legs, these are capable of bringing a rioter down at a range of 30 metres. 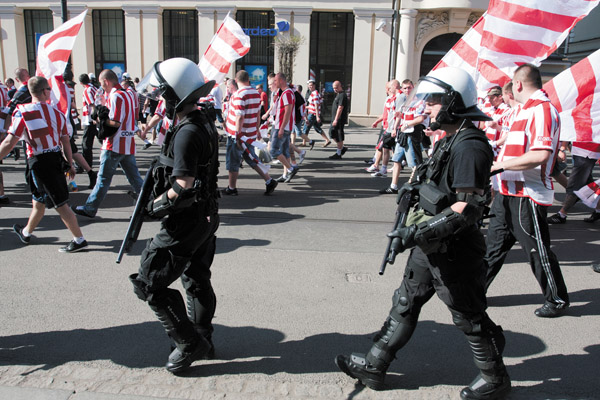 The Anti-Hooligan Unit deploys across the city to monitor fan activity. One car heads to the Market Square and confirms that dozens of fans wearing the red and white stripes of Cracovia are beginning to congregate there.

A convoy of riot vans rolls up the street leading to the square. Accompanying them is the menacing shape of a police water canon, affectionately know as the ‘Typhoon.’ The armoured, 16-tonne vehicle is a clear sign that the police will not be tolerating trouble.

The Unit go to work identifying ringleaders. They note that many fans are carrying black jackets, despite the sweltering heat.

A small group of fans on the café terrace of the Sukiennice attempt to unfurl a large banner, but it is quickly pulled down.

A mobile CCTV unit sits in a corner of the square, its occupants monitoring the growing crowd using roof-mounted cameras and feeds from other equipment around the square.

The surveillance car tags on to the end of the convoy. Red flares belch thick white smoke, and the explosions of fireworks tossed by the marchers are deafening in the narrow streets.

Police dog handlers are present to keep the fans in line and some officers are carrying the twin-tank backpacks of high volume tear gas dispersal systems. 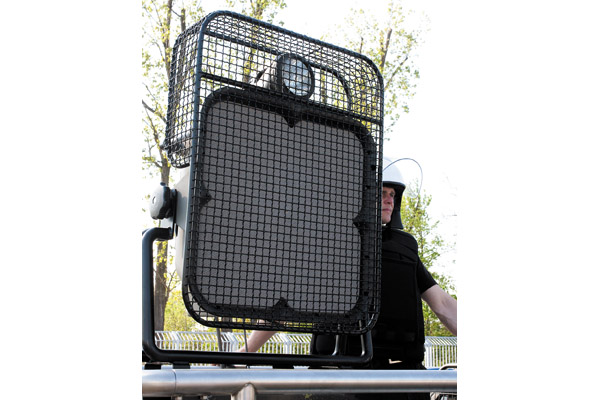 The marching Cracovia fans arrive at Błonia and assemble outside their own stadium. A line of police with riot shields stand across the road from the fans, waiting for their next move.

The hulking Typhoon is parked in plain sight. Now it is accompanied by a police pick up truck equipped with a more high-tech form of crowd control – a Long Range Acoustic Device (LRAD), popularly known as a ‘sonic cannon.’

LRADs are commonly used as highly directional loud hailers for issuing police commands during noisy street demonstrations, but they can also emit a high frequency ‘deterrent tone’ that can cause severe pain to anyone within range.

Cracovia fans make their move, marching en masse onto Błonia as the police rush to cut them off. The fans unfurl the same banner they failed to display on the Sukiennice and there is a brief stand off as police and fans face each other a few metres apart.

Abruptly, the riot police turn their backs on the fans – who take this as a signal to follow – and the parade makes its way toward Wisła stadium on the other side of the park. A police helicopter circles overhead and the CCTV van watches every move.

A lone figure with a Wisła scarf wrapped around his face appears out of nowhere and makes for the Cracovia fans. He only gets a few steps before three burly officers jump from a car parked unobtrusively nearby and close in. The man quickly removes his hood and scarf as the plainclothes men ‘have a chat.’

Security inside the stadium is provided by a private firm hired by the club. Also dressed in full riot gear, only the ‘Ochrona’ (security) logos across their backs and the lack of firearms distinguish them from the police.

After being penned outside for an hour, visiting fans are allowed to trickle into the stadium.

The 1,000 Cracovia supporters are confined to one section in the corner of the stands – the adjoining section is kept vacant as a buffer between them and the home fans, who are also filling to their seats. High, metal and perspex barriers line each section.

In the CCTV control room, security staff monitor a bank of 20 screens, with police from the Anti-Hooligan Unit looking over their shoulders. Other officers are using binoculars to scan the crowd.

Both sets of fans begin throwing fireworks across no-man’s land. Individuals dive for cover and reel with hands over their ears at the thunderclap explosions. Small fires are rapidly stamped out.

Wisła fans unfurl an enormous banner, passing it over their heads until it covers the entire stand.

It’s an impressive symbol of team support, but it also hides those underneath from the eyes of the police.

Red flares are lit at the rear of the stand, illuminating its entire length.

As the game begins, it is obvious that 90 per cent of the Cracovia fans have no interest in what is happening on the pitch.

One Cracovia fan with a loudhailer leads the team chants as fireworks and abuse are hurled at the enemy a few metres away. 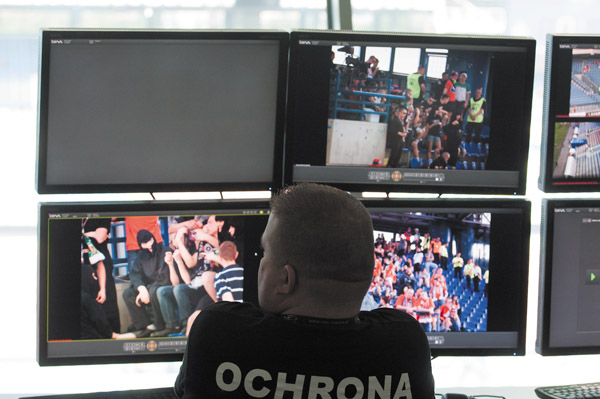 Wisła score the only goal of the match.

A group of Cracovia supporters unfurl their long banner again, but this time lines of fans stand around it shoulder to shoulder, hiding those underneath from view. “This is it,” comments an Anti-Hooligan Unit officer – and he’s right.

Fans now dressed in hooded jackets and wearing balaclavas and dark glasses emerge from under the banner and launch an assault on the security barrier.

For a hardcore of fans, this is what it’s all about – closing with their rivals for a bare-knuckle fight. On the streets, these tribal clashes involve knives, machetes and bats.

A contingent of fans races to the security gate and tries to tear it down. They are repeatedly repelled with CS spray. Other fans begin ripping up seats and hurling them at the Wisła section.

Wisła fans also rush to the rear of their section and try to break down the gate to the buffer zone. Security staff fend them off.

Within four minutes of the violence starting, scores of white helmeted riot police stream into the stadium from behind each goal. Barging onto the stands, they push both Wisła and Cracovia fans back from the barriers.

One Cracovia fan refuses to move, and is doused with orange-tinted CS spray before being shoved to the ground.

The police intervention is swift, controlled and highly professional. With the riot squad literally breathing down their necks, fans on both sides quickly become more interested in the match than in taunting their rivals. 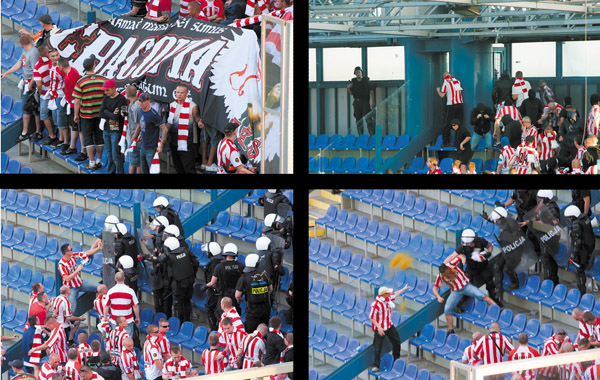 Just before full time, police snatch squads acting on surveillance conducted during the match, move into the Cracovia section and make arrests.

At full time, neither group of fans is keen to leave the stadium.

Police eventually allow Wisła fans to leave, but Cracovia supporters are kept in the stadium for up to an hour to ensure that there is no trouble outside the ground.

Violence is not expected around the ground or in the city centre. Experience has shown that fans tend to take the fight back to Krakow’s housing estates.

The Anti-Hooligan Unit take to their vehicles and head out to the city’s suburbs, their work far from over.

Marius Potaczek, deputy commander of the Anti-Hooligan Unit, told the Krakow Post the next day that 23 arrests had been made and 106 fines imposed as part of an operation that continued until 4am.

With this local matter safely resolved, Marius and his team get back to the job of ensuring that Euro 2012 matches will be policed just as effectively.