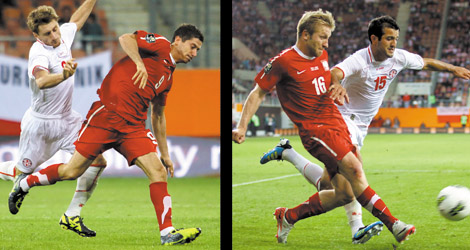 The unknown: that’s really all there is to fear just days before what is sure to be a defining moment in Poland’s sporting history. After six years of frantic construction and meticulous planning for Euro 2012, all the goodwill and enthusiasm of people across the country could unravel in an instant. Poland’s Group A opponents – Greece, Russia and the Czech Republic – are certainly beatable, but no one is really certain what kind of performance we will see out of the men in white and red who will take to the pitch on June 8.

Poland enters the tournament with a FIFA ranking of 65, by far the worst in the tournament, but the national team has made clear strides since 2009 when they were embarrassed in World Cup qualifying. Yet that was the last time that Poland played in any real competitive matches, so just how this team will respond to the pressure of co-hosting a major tournament is a big unknown.

More than in years past, manager Franciszek Smuda has called on talent from foreign leagues. On the final 23-man roster, eight are currently under contract with clubs in the German Bundesliga. Two-time defending league champions Borussia Dortmund have contributed three players to the Polish team: captain Jakub Błaszczykowski, prolific scorer Robert Lewandowski and defender Łukasz Piszczek. All three of them are likely to make the starting lineup. At the age of 26, Błaszczykowski is the second youngest captain in the tournament after France’s Hugo Lloris. ‘Kuba’ missed the entire 2008 season because of a hamstring injury sustained days before the tournament, but now he has the task of holding the Poles together on the pitch.

The team’s success or failure will depend heavily on Lewandowski, who will have to be the offensive catalyst in Poland’s 4-2-3-1 formation. He emerged as Poland’s main offensive threat in 2010 while leading Lech Poznań to the Ekstraklasa title. Since his move to Dortmund, Lewandowski has only continued to improve, as evidenced by an emphatic three-goal performance against Bayern Munich in the German Cup final, which Borussia won 5–2.

Arsenal’s Wojciech Szczęsny is the clear choice in goal, and at 22 he is the youngest starting keeper in the tournament. Questions remain about the backup spot where Jagiellonia Białystok’s Grzegorz Sandomierski will replace Łukasz Fabiański due to a shoulder injury suffered during training that will keep him out for tournament entirely.

The only Krakow-born player on the squad is defender Marcin Wasilewski, who began his career in the Hutnik youth system and now plays for Belgian champions Anderlecht. At 31, he is the elder statesman of the Polish side. Though no current players from any of Krakow’s clubs are represented in the national team, forward Paweł Brożek, midfielder Dariusz Dudka and the aforementioned Błaszczykowski all spent time with Wisła earlier in their careers.

After Smuda had selected the provisional squad, the team began training in Austria and played friendlies against Latvia and Slovakia in Klagenfurt, which both ended 1–0 to Poland’s Biało-Czerwoni. The Poles played sloppily against Latvia, but Smuda called on several inexperienced players while resting the star Borussia trio. Taking advantage of the opportunity, Artur Sobiech scored a goal in just his fourth international appearance. French-born defender Damien Perquis, who received his Polish passport only last September, also notched up his first international goal in the 30th minute against Slovakia. After a first half of effective attacking play featuring most of Poland’s regulars, Smuda experimented with a slew of substitutions in the second half.

The team next faces lightweight Andorra for a final tune-up in Warsaw ahead of Euro 2012’s opening match between Poland and Greece on June 8. The visitors will be hungry for redemption. After becoming shock winners of Euro 2004, Greece fell back to earth, finishing last of the 16 teams in the most recent championship.

On June 12, Poland will remain in Warsaw to take on Russia, who are slight favourites in the group despite key injuries in their defence, even according to manager Smuda: “I think all four teams [in the group] have a chance, but Russia are the favourites.”

Poland concludes group play against the Czech Republic on June 16 in Wrocław. Whether or not the Polish team sees any matches beyond that, we will know soon enough.