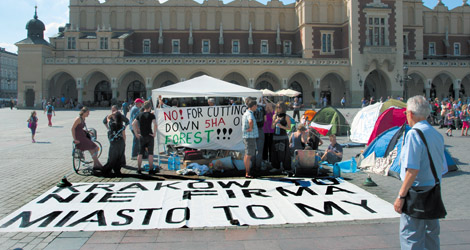 A global protest movement reached Krakow in May – but lasted just a few days before police broke up their camp in a dawn raid.

Occupy, protesting against the stranglehold that they say benefits large companies and financial institutions over ordinary people, set up camp in the Rynek Główny on May 22.

But, on May 26 at 6am, police moved in to break up the protest, deemed by city authorities to be illegal. At least 15 people are required in order for a protest to be legitimate, but officials said that only five took part in the Occupy Krakow event. Protest organisers argued that there were 19 people, but that authorities had deliberately ‘overlooked’ those in the tents.

Some of the protestors went willingly when police moved in, but others had to be removed by force. According to the newspaper Gazeta Krakowska, up to 30 people were demonstrating during the police raid, but it is not clear how many of these had been part of the camp since the beginning. Tents and equipment were seized, and organisers now face a fine of around 1,000zł.

However, the protest may not yet be dead. Occupy organisers in Krakow are now in talks with the managers of the Bunkier Sztuki gallery, and hope to re-establish their camp at the gallery’s car park.

Photo: ‘Krakow is not a company, it’s our city’ – (photo: David McGirr)

One thought on “Krakow Occupied – Briefly”