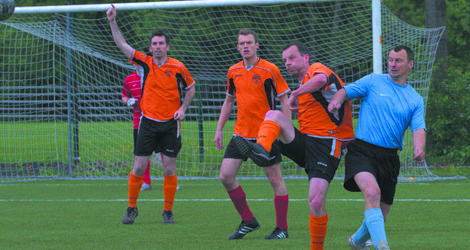 The arrival of the England, Italy and Netherlands teams in Krakow for the European Championships is set to cause quite a stir – but it’s by no means anything new for the city.

Representatives from all these nations and more have been playing regular matches in Krakow for around ten years, but they’ve all been playing on the same side – Krakow United, a club that draws on the talents of expats and Poles alike for Sunday league matches.

The club’s Andrew Keogh spoke to the Krakow Post about their ethos. He said that the emphasis was very much on the word ‘United’, and that players, as well as bridging international borders, also represented a wide range of ages and occupations. Krakow United has had 50-year-olds turning out alongside 20-somethings, and teachers lining up next to former professional players, politicians and businessmen.

Andrew said: “Of course, the games do get passionate sometimes, but we all love playing and it’s not meant to be personal. When we are not playing, we sometimes organise events among ourselves.”

And that’s not just events between club members. Andrew added that, when Krakow United visit Polish village teams for league matches, they are always warmly welcomed. It’s not unusual to find a barbecue, a few beers and lots of friendly banter awaiting at the host team’s club house after a hard-fought 90 minutes on the pitch.

The Sunday league schedule is organised by members of each club – of which there are about ten – who set up games, organise referees and so on. The players share the costs of officials’ salaries and other expenses between themselves.

Krakow United’s ‘home ground’ is the pitches in the shadow of Wawel Castle. However, they decamp to another ground in the city when this is not available – and it’s the same ground on which England will be training, the Hutnik stadium in Nowa Huta.

The stadium has come in for a lot of negative press from the UK tabloids, which have branded it as a shambles, ill-equipped to handle the English squad’s requirements. But, most irritating for Andrew and those at Krakow United, was the statement that Hutnik’s ground was ‘not fit for a Sunday league team’.

“I take offence at the Sun newspaper’s description of the Hutnik stadium,” he said. “It is one of the best grounds in the league.”
The Krakow Post visited the stadium with Krakow United, during a league game in May, and Andrew’s description of the facilities – clean, modern, recently installed, with high-quality playing surfaces – stood up to inspection.

Whatever the fate of the three teams that will live and train in Krakow during their tournament, it’s a sure thing that Krakow United will still be here next season, their players keeping fit, meeting new folk or simply running off a hangover with a Sunday morning kick-around. They’re open to new members – of any nationality – and would be especially keen to hear from individuals and companies that might want to sponsor them. If you’d like to join, give them your money, or simply go along to a match and cheer them on, email andykeogh@hotmail.com.