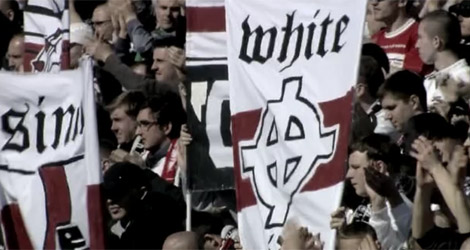 The impression given by Euro 2012: Stadiums of Hate was that the tournament’s host nations are, at best, casually tolerant of far right extremism or, at worst, hotbeds of neo-Nazism.

Showing some of the more extreme footage to ex-England captain Sol Campbell, programme presenter Chris Rogers elicited the response that fans should stay away or risk “coming home in a box.”

I cannot speak for Ukraine, but I have lived in Poland for five years, and the image of this country portrayed in the documentary does not reflect the one I know.

Poland, like every nation, has its problems with extremists, but the idea that there are ranks of fanatical nationalists goose-stepping in and out of football stadiums is absurd and alarmist.

One serious problem with Stadiums of Hate was that is conflated two very different situations in two very different countries. Poland and Ukraine may be neighbours, and intimately linked historically, but they are far from the same.

Poland has experienced what is beginning to be recognised as an economic miracle over the past decade, while Ukraine, languishing on the wrong side of the EU’s borders, has suffered through stagnation and divisive revolution.

It’s not a simple equation, but the coincidence of nationalist violence with poverty and political upheaval is too frequent to dismiss. Poland is becoming more open and tolerant as it becomes richer and more stable, Ukraine isn’t.

At bottom, the evidence presented against Poland was that it tolerates anti-Semitism. This is both true and untrue. It touches on a very tangled confusion between what the West means by ‘anti-Semitic’ and what Poland means.

When British journalists hear fans chanting ‘Death to the Jews,’ their jaws drop. This kind of thing is at the furthest reaches of taboo from the perspective of the West. When locals tell them that these taunts aren’t about the ‘actual’ Jews at all, the tape recorders are running, but nothing registers. The explanation simply does not compute.

The horrible, but simple, truth is that, when Polish hooligans label their enemies ‘Jewish,’ they are doing pretty much the same thing that the average, middle-class Brit is doing when he calls his friend’s trousers ‘a bit gay.’

It’s not ‘harmless banter’ and the world would be a better place if human beings didn’t do this kind of thing, but Polish hooligan chants are not genuinely anti-Semitic for the simple reason that the average Polish hooligan has no idea what a Semite is.

In other words, and with a burning recognition that this is almost impossible for someone in the West to understand, the only thing on the mind of that red-faced fan screaming ‘anti-Semitic’ obscenities from the terraces, is hatred of his Catholic compatriot waving a different coloured scarf on the other side of the ground.

It’s a horrifying historical irony that Poland, a country that was once home to millions of Jewish people and witnessed the near-total extermination of this segment of its population, is today almost completely ignorant of Judaism.

Very few Polish people alive today have ever knowingly met a Jewish person, and still fewer have any memory of what Jewish communities in Poland were like. In fact, increasing numbers of young Poles are now discovering that they are themselves Jewish, this fact having been quietly ‘forgotten’ by previous generations living through more deadly times, and exploring what this means in a quite enthusiastic way.

When visiting journalists report what looks to them like genuine, Elders-of-Zion-inspired anti-Semitism in Poland, Poles throw up their hands in horror and rattle off the ranks of Polish names listed as Righteous among the Nations – and there are a lot of them.

From a Polish point of view, calling Poland anti-Semitic makes about as much sense as calling a man who’s had his legs amputated ‘anti-walking.’ The Jews who were murdered in Poland were Poles. Their loss was a blow that, arguably, the nation is still recovering from, and Poles are well aware of this.

There are genuine, bone-headed anti-Semites in Poland, just as there are in Tunbridge Wells, and some of them are football supporters. The casual use of anti-Semitic terms I have described is not okay and needs to be tackled, but, contrary to appearances, they are not evidence of an alarming neo-Nazi movement.

I suspect the international media will continue to take the line that an anti-Semitic slogan is an anti-Semitic slogan, regardless of the context. I have a lot of sympathy with this point of view, while recognising that it misses something important about Poland that results in unfair and misinformed finger pointing.

In an ideal world, this experience will force Poles to re-evaluate their sensitivities to language, just as Britain learned that Golliwogs may not have been the harmless idea we thought they were when I was a kid.

310 thoughts on “Perspectives on Poland: Coming to Terms with Anti-Semitism”