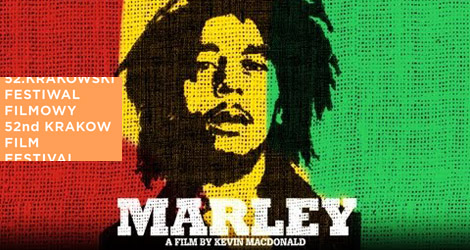 There are superstars, and then there are people like Bob Marley – iconic figures that seem to fully-formed universes unto themselves. How do you get to the man behind an image like that?

This is the task that Academy Award winning documentary filmmaker Kevin Macdonald has set himself in Marley. And Poland will get its first chance to see the result at tonight’s opening ceremony of the Krakow Film Festival.

This is not the first time Macdonald has taken his audience behind the scenes of history. His 1999 Oscar winner One Day in September was a ground-breaking retelling of the Munich massacre and The Last King of Scotland used fictional dramatization to get under the skin of a much more terrifying icon – Idi Amin.

Macdonald’s approach to the man who reassured us ‘every little thing gonna be all right’ is rather different. Making full use of close access to the friends and family of the King of Reggae, the movie takes us on an exhaustive journey around the people, places and music that made up Marley’s world.

Featuring previously unheard tracks, Marley’s soundtrack is as lush and evergreen as the Jamaican backdrop. Add to this never-seen-before footage of the man himself and I’m sayin’: lets get together and feel alright.

The curtain goes up on the Festival’s opening ceremony and the Polish premiere of Marley with Kevin Macdonald in attendance at 6pm this evening in Kijów.Centrum Cinema.