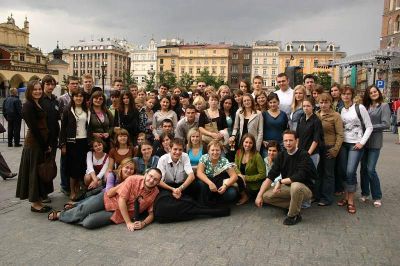 Krakow Jesuits, a Catholic charitable organization, and volunteer teachers from Poland and the U.S. team up to offer an English-language summer camp to poor youths each year.

The organization, known as the Work of the New Millennium, sponsors the youths, most of whom are 16 to 18 years old. They must come from impoverished areas or from families unable to afford special language classes.

“One crucial criterion for these teen-agers is very good grades at school, together with a level of English sufficient for communication,” said Maciej Kranc, a Jesuit priest who oversaw this year’s course. “We host an elite group of young people – not in terms of material possessions, but in an intellectual sense. Some of them have participated in national English-language competitions or are preparing to pass the International Baccalaureate exam.”

This year’s camp, which ran in July, was the fourth. Each Catholic diocese in Poland, which covers several churches, selected one student for the two-week course. The students were divided into classes according to their skill levels. The classes were intensive, running all day long. The youths stayed in rooms at the Jesuit monastery, or in rented university dormitories.

The camps include a lot of grammar, but the main focus is conversation. To give students the best conversational experience, native English speakers lead the practice sessions.

“I participated in the course at the beginning of July, my candidature was proposed by the Work of the New Millennium,” says Ewa Czapiewska, a participant of this summer’s course. Czapiewska added that before she came she wondered how much she would learn. When classes started, though, her attitude changed.

“We had wonderful teachers from the U.S. and excellent learning conditions in small groups,” said Czapiewska. “For 50 students there were 14 teachers, so groups consisted of  eight to nine students each. We did exercises in grammar, but the main emphasis was speaking.”

Volunteer teachers came from Loyola University in Chicago and other American universities, Father Kranc said. In all, he said, “about 40 people came to Poland to help us this year. Some of them are professionals who instruct non-professionals on how to teach English.”

The volunteers were very friendly with the students, Czapiewska said. “We exchanged contact information and have emailed each other since then. The camp allowed me to overcome my shyness and proved that I can speak English well.” She added that her high school teacher noticed how less pronounced her English-language accent had become.

Late afternoons at the camp were filled with recreational activities and sightseeing around Krakow. It was the first time most of the students had really become acquainted with Krakow, Father Kranc said. “They had passed through the city at one time or another, but had never seen its monuments. They became enchanted with the place’s atmosphere.”

The students were also given the opportunity to attend an English-language mass each day, although it wasn’t mandatory, Father Kranc said. “We advised them to take part in it just as a language exercise because all of them were in English,” he said. “It turned out that everybody attended every day.”

At the end of the camp each student received a certificate for completing the course. The paper was nice, but the real payoff was the progress each student made.

Teachers could see the students’ confidence soaring by the end of the first week.At that point these young people “had overcome their language barrier and started using English boldly,” Father Kranc said. In addition, he said, they had become motivated to continue mastering English during the regular school year.

Some of the volunteer teachers also worked with grade-school children at a Jesuit orphanage in Zmiaca. The volunteers didn’t do formal teaching with the orphans, who were 10 years old or younger. They played and had other interactions with them. Father Kranc said he hoped the experience gave some of the orphans the motivation they needed to learn and to develop relationships with others.

“All the participants showed their gratitude towards us for the time spent with them,” Father Kranc said. “We felt rewarded,” he said.