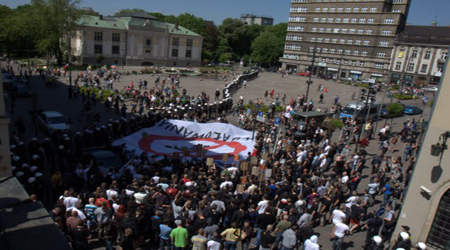 Police were forced to intervene as violence broke out between gay rights campaigners and ultra-nationalists in Krakow on Saturday.

Both groups held marches through the city centre, each ending at Plac Szczepański. The Marsz Równości (March of Equality) was organised in support of gay, lesbian and bisexual rights. They wanted to raise awareness of homophobia in schools, and to promote same-sex marriages – civil partnerships. Narodowe Odrodzenie Polski (NOP – National Rebirth of Poland) saw participants waving anti-gay posters and shouting nationalist and homophobic slogans.

Although the two marches were separated by an hour and a half, a small group of NOP members had to be restrained by police when violence broke out on Pl. Szczepański. Officers used batons to break up the groups, and order was restored after a few minutes. Marsz Równości later continued on to Plac Wolnica, in Kazimierz.

One thought on “Equality and Nationalist Marchers Clash”