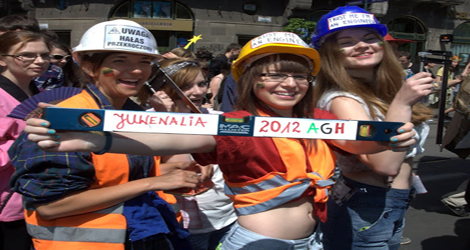 It could only have been Juwenalia, the annual student-fest at which Krakow temporarily relaxes its rules and hands over the city to the leaders and entrepreneurs of the future – dressed as Smurfs, Lego men, a tank with legs, and more.

Friday’s celebrations kicked off with live music and sunshine in the square, as the city centre filled with students keen to let their hair down after a year slaving in the libraries of the city’s universities. It is traditional for the authorities to turn a blind eye to minor misbehaviour, and although the police presence at Rynek Główny was highly visible, the day passed without incident.

Krakow Post photographer David McGirr took a step back into his own youth to attend the festival and bring back these pictures of the day’s events.