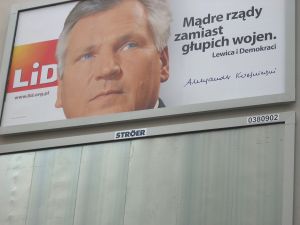 A campaign warning women of the dangers of drinking alcohol when pregnant has suffered a setback because free billboard space usually provided to charitable causes has instead been sold to politicians in a heated early campaign.

The campaign was launched in early September with the motto, “I Don’t Drink to its Health,” after months of planning by the National Agency for Solving Alcohol Problems (PAPPA) in cooperation with the Polish Gynecologists’ Association.

Billboards promoting the issue were supposed to be displayed in 600 of 800 Polish cities. However, as the newspaper Gazeta Wyborcza reported, none were seen in Silesian cities.

It seems that an early election has spoiled the plans of the campaign’s originators. Krzysztof Brzozka, chief of PAPPA, said agencies that owned billboards preferred to sell them to politicians rather than donating the space to educational nonprofit campaigns. Media Concept is the only agency that provided some free billboards for the anti-alcohol campaign.

Silesia has only three and all are in Katowice on ul. Pukowca. Bielsko-Biala, Gliwice, Zabrze and Sosnowiec won’t get a single one. Even Warsaw, where usually it is not difficult to find money or advertising space for charitable campaigns, has only four billboards.

In such circumstances PAPPA will have to limit its action to pamphlets distributed in clinics and gynecologists’ waiting rooms.

“It is not enough. Nothing is as forceful and effective as outdoor advertising and television commercials,” Brzozka told Gazeta Wyborcza . He added that the campaign will go forward again after the election.

Campaign organizers stressed the importance of their cause. They point out that some women, even highly educated ones, believe that if they consume just three drinks and limit their drinking to wine or beer their babies will be unharmed. But last week in Dabrowa Gornicza (Upper Silesia) a baby girl with 1.9 percent blood alcohol content alcohol was born.

Such incidents alarm campaign organizers, who cite the bad effects of alcohol on the unborn, including fetal alcohol syndrome (FAS). FAS is an entirely preventable birth defect caused by the use of alcohol during pregnancy. Symptoms include growth retardation, certain facial features and brain damage. Brain damage means that a child may have serious difficulties with learning and remembering, analysis and getting along with others. FAS babies may also suffer from heart, kidney, liver or other organ damage as well as from vision and hearing difficulties.

Many people believe effective media campaigns create awareness, change attitudes and motivate individuals and communities to engage in healthy behaviors. The goal of this campaign is to reach the maximum number of women with a small budget using targeted marketing strategies to encourage women to abstain from alcohol while they are pregnant or planning to become pregnant.

Campaign organizers want to educate women about what FAS through various channels, such as magazine editorials, TV programming, web sites, pamphlets and posters, with an emphasis on Silesian women. As for now, however, the campaign in question has been defeated by an election campaign.

“We couldn’t find cheap or free-of-charge billboards and TV commercials. We have an early election and everyone wants to use this time to earn money,” Malgorzata Zakrzewska of Media Concept told Gazeta Wyborcza.