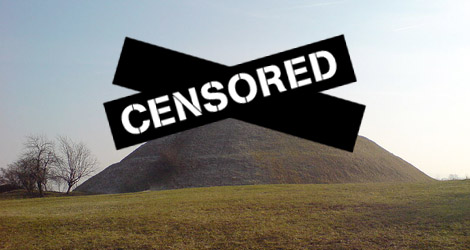 Stags and footie fans hoping to get an eyeful of womanly Polish curves in Krakow this summer could get more than they bargained for, as plans are announced to convert a local hill into a giant breast.

A winning project for this year’s ArtBoom Festival will see Kopiec Krakusa dyed pink and topped with a nipple sculpture made of ‘delicious breast foods.’

To complete the picture, the foot of the mound will be swathed in white cloth, so that the giant boob appears to be emerging from clothing.

I’m assuming this is part of a drive to make Krakow into a centre of art and culture, rather than the kind of place stag parties go to see giant boobs emerging from clothing.

From the top of Kopiec Krakusa you can look across the city to the similarly suggestive shape of Kopiec  Kościuszki. I’m sure you can see where I’m going with this observation already.

It would take just a little vision for the royal capital to be fully stacked with a sizeable pair of earthern charlies. Nestled in the valley between them, Krakow could promote itself as the City in the Cleavage. If that doesn’t encourage a better class of tourist, I don’t know what will.

Slipping slightly deeper into knocker-induced reverie, I have a vision of Krakow as a vast and coarse wench capable of crushing the Świebodzin Jesus under thumb.

And, to be serious for a moment, I’m guessing that’s part of the point of the art project – a feminist-tinged acknowledgement of the confrontational power of the naked pagan breast in a culture questioning its traditional values.

Will this jolt the media into a deep questioning of the objectification of the female form? No, it will spawn a cluster of over-excited editorials written by men with access to a web search for breast synonyms – not entirely unlike this one.

There is a more sinister possibility. Could it be that the city is planning to deploy the Krakow Boob as a giant pacifier?

Noting the hypnotic power of unleashed sweater puppies over the average male, might it have occurred to the authorities to draw troublesome young men away from the bars of the city centre with the vision of a 16-metre tall tater? Those getting too close could be relied upon to topple into the Liban Quarry and cause no further trouble.

Next week, my entirely original and unrelated idea for what to do with Szkieletor Tower.

3 thoughts on “Perspectives on Poland: The Krakow Boob”