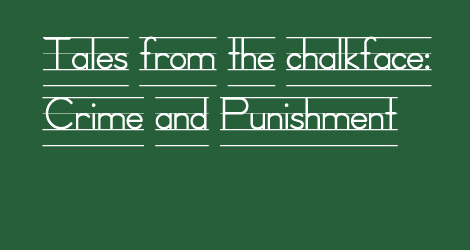 Columns Tales from the Chalkface
May 16, 2012 Chris Riley 0 Comments

It’s okay, I’m not about to launch into the first chapter of my own version of a Russian novel. Instead, I’ve been considering one of the teacher’s less pleasant roles: how to respond to the unwilling learner. This came about because I did something last week I hadn’t done for a very long time – I gave one of my students lines. Apart from Bart in the opening credits of The Simpsons, I can’t think of anyone who has to write lines, or of many teachers who give them nowadays. Mine weren’t witty or long, just a message to reinforce a point… or not, as the case may be.

The received wisdom in teaching is that one should always be ‘firm but fair,’ though one teacher’s ‘firmness’ can be another’s ‘strict to the point of irrationality.’ Of course, praise is better than blame, and in an ideal world, the teacher-student relationship should be harmonious since we’re all working together for the same thing… aren’t we? Well, that depends. A teacher’s aim as written in their plan, to revise the past perfect for example, may not coincide with a student’s plan, which could be to get through the lesson without admitting he didn’t do last week’s homework.

In reality, a teacher’s armoury of enforcement is limited. The obvious weapon of giving an after-lesson detention is often a self-punishment since it takes up the teacher’s time as effectively as the miscreant’s. It can be effective on a practical level, if it can be used to catch up on that homework that hasn’t been handed in, but as a way of changing attitudes, it’s a dead loss – and it’s attitudes that make the difference.

Personally, I dislike having to enforce discipline and hope that order will arise from good will and good humour. Fortunately, this is true for everyone in my current school – hence the rarity of handing out punishments.

One colleague from many years ago had a novel way of getting students to remember not to make particular mistakes. His bugbear was the conjoining of the words ‘a lot’ to make the nonsense word ‘alot.’ Having pointed out the error once, if it occurred again, as it often did, he would take the paper, or worse still, the exercise book, and publicly cut each offending ‘alot’ into two separate words with a pair of scissors, thereby destroying much hard labour in the process. This public execution of essays caused cries of woe from the offenders, but nobody who saw it ever did it again. This teacher was a young, energetic Irishman, loved for his daft jokes and enthusiasm. He could do outrageous things and get away with them. I’m not an advocate of cutting up student’s work, nor do I advocate capital punishment… I mean ‘corporal’ punishment – that was just an innocent slip.