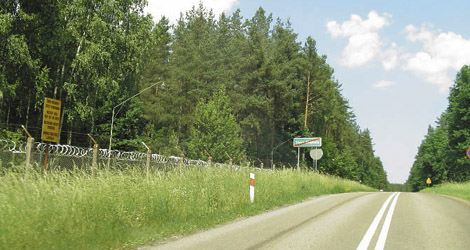 The investigation into Poland’s involvement in extraordinary rendition and ‘enhanced’ interrogation is being played out in Krakow courtrooms.

Set in a green corner of Poland scattered with bubbling springs and placid lakes, the manor house that is home to the 2nd Unit Training Centre of the Agencja Wywiadu (Poland’s intelligence agency) is located in the village of Stare Kiejkuty in the Masurian Lakeland.

The 2nd Unit’s headquarters, known as ‘the wood’ among Polish security operatives, is tucked away out of sight, separated from the 1st Unit by a small grove of trees impenetrable to journalists and human rights activists.

It was here, critics claim, that the Polish state allowed terror suspects snatched by the CIA to be imprisoned and tortured in flagrant disregard for Polish and international law.

In distant Krakow, the convoluted legal investigation into these allegations is drawing to a close. The case was transferred from Warsaw to the Prosecutor’s Office in Krakow in January of this year, and its conclusion is scheduled for August 12, 2012.

One of the two principal prosecutors, Jerzy Mierzewski, was removed from the case before its transfer to Krakow. Gazeta Wyborcza later obtained access to his files and claimed that the prosecutor was preparing to file charges stating that acts in breach of the Polish constitution and international law had occurred in Stare Kiejkuty.

“Mierzewski was removed from the investigation into secret CIA activities due to the need to assign him to another case,” said a spokesperson for the Prosecutor’s Office in Warsaw in May 2011.

“To ensure credibility, the chief prosecutor must stop hiding behind the veil of state secrecy and explain why the latest prosecutor was replaced,” said Julia Hall, Amnesty International’s expert on counter-terrorism and human rights.

The International Committee of the Red Cross completed a report into the treatment of 14 CIA detainees, including Abu Zubaydah, in 2007. It concluded that the men had been subject to numerous enhanced interrogation techniques, including waterboarding, beatings, sleep deprivation and forced nudity. Some or all of these may have occurred at Stare Kiejkuty.

The men have been offered pro bono legal support from a group of lawyers assisting them both in the United States and in Europe.

Following Mierzewski’s removal from the case, al-Nashiri’s legal representatives filed a case against Poland at the European Court of Human Rights, which was eventually registered on May 9, 2011.

“The case is still pending the court’s decision as to further procedure. Given that the application was granted priority, we would expect that a procedural step will be taken within the next few months,” said the ECHR’s press office.

“Al-Nashiri was abducted from Poland without issuing any extradition warrant, thus violating Article 2 of the European Convention on Human Rights with regard to the right to life,” said Mikołaj Pietrzak, al-Nashiri’s defence attorney in Poland.

“Despite Mierzewski’s efforts, the investigation has so far been ineffective because Poland didn’t make any attempt to obtain legal support from the United States,” added Pietrzak, who also confirmed that he has maintained contact with al-Nashiri’s lawyers across the Atlantic.

“These developments further confirm that the Polish investigation is incapable of vindicating Mr al-Nashiri’s rights. We hope that the ECHR will act swiftly to render justice in this case,” Amrit Singh of the Open Society Justice Initiative told the Krakow Post.

At the end of March this year, further details of the case were leaked to Gazeta Wyborcza and television news program Panorama, revealing that former AW chief Zbigniew Siemiątkowski has been under investigation for his role in the rendition and torture programme.

Siemiątkowski, who headed the AW between 2002 and 2004, was recently sentenced to one year in prison for endorsing the illegitimate arrest of the former CEO of Polish oil giant PKN Orlen, Andrzej Modrzejewski during the so-called Orlengate affair.

In a letter published in April 2012, the Krakow Appellate Court confirmed that 62 people have been questioned in connection with the Stare Kiejkuty case to date. It also confirmed that Poland has requested legal assistance from both the US government and human rights experts abroad.

The situation is complicated by the fact that both al-Nashiri and Zubaydah are now subject to US military tribunals at Guantanamo Bay, but it is the US Department of Justice that is responsible for international co-operation in criminal investigation.

“If the AW provides the prosecutor with all the documentation related to the detention program and their co-operation with the CIA, US support might not be essential in order to make solid charges,” Helsinki Foundation for Human Rights spokesperson Małgorzata Szuleka told the Krakow Post.

Photo: Security fences around the military base at Stare Kiejkuty

One thought on “CIA Prisons In Poland Case Continues in Krakow”