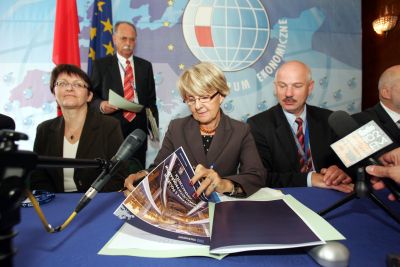 Two key announcements that involve Poland’s relationship with Russia came out of the 17th annual Central and Eastern European Economic Forum in Krynica last week.One was about U.S. plans to build part of a missile defense project in Poland, a decision that Russia has been snarling about.

The other was about plans for a pipeline from the Caspian Sea to Poland that would make Poland less dependent on Russian oil. Daniel Fried, the U.S. assistant secretary of state for European and Eurasian Affairs, said the U.S. hopes the missile-defense-facility negotiations between Washington and Warsaw will be wrapped up by the end of the year.He acknowledged that the new parliamentary elections in Poland may affect the timetable — and even the plan itself.

To hedge its bets, the U.S. is discussing the missile-defense project not only with the current government but also with leaders of opposition parties that could come to power in the October 21 vote.The other key Poland-related announcement at the Economic Forum came from Poland’s Minister of Economy Piotr Wo-zniak. He said an important discussion about a proposed pipeline connecting the Caspian Sea oil region with Odessa, Ukraine, and Gdansk, Poland, will take place in Tbilisi, Georgia, on September 26. He said he hopes the meeting will produce a “go” on the project.

The project will allow Poland to obtain oil from a source other than Russia. Poland and the rest of Europe want to become less dependent on Russia for oil and gas because Russia has been using energy as a foreign-policy hammer in recent years. It has cut off oil and gas to countries that were not “playing ball” with it, including Ukraine. Georgia, Azerbaijan and Lithuania have signaled they are likely to take part in the venture. Wozniak said he is encouraging Kazakhstan and Slovakia to participate as well.Wozniak also announced that Poland will become the 27th member of the International Energy Agency, an organization established in 1974 to prevent disruptions in world energy supply. Most EU countries are in the organization, as well as the U.S., Canada, Australia, New Zealand, Japan, South Korea, Norway and Turkey.

In another energy-independence-related development, the leaders of Norway’s and Poland’s state-owned petroleum companies met during the Economic Forum on plans to build a pipeline from Norway to Poland. Brian Bjordal of Norway’s Gassco huddled with Rafal Oleszkiewicz of Poland’s PGNiG about the pipeline, which will also supply Sweden and Denmark.Norway is a major producer of oil from offshore platforms in the North Sea.

Other Polish leaders at the forum besides Wozniak were Finance Minister Zyta Gi-lowska, Regional Development Minister Grazyna Gesicka and former President Aleksander Kwasniewski.Neither Prime Minister Jaroslaw Kacz-ynski nor President Lech Kaczynski showed. They are busy campaigning for the snap election that the prime minister called after dissolving parliament on September 7, 2007. Jaroslaw Kaczynski’s decision to skip the forum led to Prime Ministers Viktor Yanukovich of Ukraine and Gediminas Kirkilas of Lithuania cancelling. They had apparently hoped to meet with Kaczynski in Krynica.

The forum, which this year ran from September 6 to 8, has developed over the years into a major world economic event. It attracts important dignitaries, including heads of state, and often generates news.The original reason for starting the forum was to facilitate communication between politicians, business people and academics throughout Central and Eastern Europe. About 2,000 delegates from Europe, the Americas and Asia took part this year.The theme of this year’s forum was “Europe – Crisis, Change or Chance?” The program included 130 discussion panels on 10 subjects – from culture and science to the “new economy.” The forum also featured presentations of cities, regions and companies. And it included concerts and exhibitions.aEven though participants from many countries and professional fields discussed the issues, the 400 journalists at the forum focused their reports on the energy security of Europe – a topic much on the minds of both European leaders and common folk.