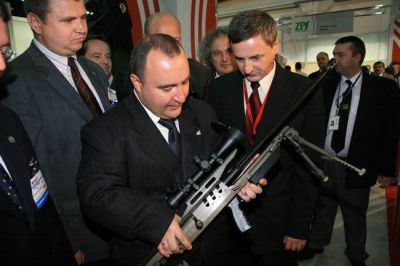 An exhibition of advanced military technology and equipment from 21 nations – missiles, propellants, rockets, armaments, explosives and more – attracted defense and industry specialists to Kielce September 3-6. Nearly 200 spectators turned out for the 15th International Defense Industry Exhibition, held under the honorary patronage of Polish Prime Minister Jaroslaw Kaczynski. As in previous years, exhibition pavilions of Kielce Trade Fairs hosted representatives of the world’s leading defense industry companies. The exhibition is one of the largest defense industry fair events in Europe. The event attracted considerable attention by military experts, Polish and foreign exhibitors and organizations related to national defense. The exhibition is an initiative supported by the Polish government.

Przemyslaw Gosiewski, deputy prime minister, presided over the opening day ceremonies, together with Aleksander Szczyglo, Poland’s minister of defense. Claude Bolton, assistant secretary of the army represented the U.S. at the opening, together with Victor Ashe, U.S. ambassador to Poland. In addition, the director of the Defense Advanced Research Project Agency and chief scientist of the U.S.

Army were presented. This year’s edition of the fair boasted the most rented exhibition space, some 18,931 square meters accommodating 364 companies from 21 countries. The companies included Lockheed Martin, BAE Systems, Sikorsky, Rafael, Patria and General Dynamics, as well as Boeing, SAAB, IBM, Toshiba, Panasonic and Motorola. A total of 178 Polish and foreign journalists covered the fair.In the outdoor display area, the Land Forces and some exhibitors organized presentations of military equipment in operation.

The range of products exhibited encompassed armored equipment, classic armament, missiles and rockets, explosives, equipment and materials for chemical-warfare units, air and air-defense equipment, as well as equipment for the Navy, Police, Border Guards, Fire Brigade, Civil Defense; transport, electronic and optoelectronic equipment and metric devices.What has become a tradition of the exhibition are presentations of the potential of individual countries’ defense industries. In recent years, presenting countries have included Germany and France and – in 2006 – Israel. This year’s fair included a national exhibit from the U.S. The U.S. national exhibit was entitled, “Developing Forces for Coalition Operations: Supporting Soldiers from Ground to Space.” Twenty-four American manufacturing firms were represented, including industry leaders such as Boeing, Lockheed Martin and Raytheon.

He said that by mid-2010, the government plans to boost the number of companies in the Bumar Group by 17. The Bumar Group is the largest defense industry group in Poland. Bumar, which is concentrated mainly on land systems (ammunition, military vehicles, missiles and propellants, arms and weapons, air-defense systems), includes 19 manufacturing and trading companies of the Polish Defense industry.

The capital of the Bumar Group, amounted to 800.4 mln Polish zloty (around $288 mln) as of October 2006. “The target for the Bumar group is to grow to 36 units from 19 at present,” Go-siewski told a news conference. He said the project should be completed in two to two and a half years. Noting that today on the European market big and strong companies are needed, Gosiewski assured listeners that Poland will have such a company.”