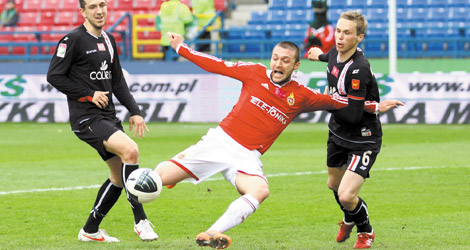 Wisła Krakow’s quest to qualify for next season’s Europa League is all but over after a bitter loss to Ruch Chorzów in a match that went the distance and beyond. After 120 minutes of exciting football and seven rounds of penalties, the visitors from Chorzów ultimately earned the right to play in the Polish Cup final.

Wisła now faces the longest odds of attaining UEFA qualification with the club sitting 7th place in the Ekstraklasa table just one year removed from a league championship.

Wisła and Ruch each managed 3–1 wins at home to force the deciding match after the second leg in Krakow. The first meeting in Chorzów was closer than the score indicated, as Paweł Abbott converted a questionable penalty in the 74th minute to give Ruch a two-goal aggregate lead.

The return leg featured even more controversy, beginning with an apparent Wisła goal by Gervasio Núñez in the15th minute, which was disallowed without any clear explanation. The home side were partially redeemed moments later when the referee awarded a penalty after Ruch defender Gábor Straka tripped Ivica Iliev. Tsvetan Genkov calmly put the ball in the net to open the night’s scoring in the 22nd minute.

Wisła doubled their advantage for the night when Maor Melikson controlled a long-distance upfield pass from keeper Sergei Pareiko and slipped the ball in from a difficult angle right of the goal to give the White Star a 2–0 lead for the night. With the score 3–3 on aggregate, and a 1–0 advantage on away goals, Wisła were in position to reach the cup final.

That all changed in the 68th minute when Wisła’s Dragan Paljić appeared to drag down Ruch forward Łukasz Janoszka in the penalty area, leading to Abbott’s goal that gave Ruch a one-goal advantage on aggregate. During the desperate waning moments for Wisła, Patryk Małecki’s pass (aided by a possible Ruch deflection) found Genkov for a point-blank header in the 90th minute to force extra time and the eventual penalty shootout to decide which club would advance.

Pressure mounted when David Biton’s shot was saved by Matko Perdijić, but following a Ruch miss, the teams were again level with four goals apeice after the usual five attempts. Genkov’s shot was saved on his initial attempt in the 5th round, but he was given another opportunity after Perdijić was ruled out of position. Wisła were finally broken when Gervasio Núñez’s low left strike was handed off by Perdijić in the 7th round, ensuring Ruch’s advancement.

Ruch went on to lose 3–0 against Legia Warsaw in the cup final while Wisła rebounded with subsequent wins against ŁKS and Podbeskidzie in Ekstraklasa play.