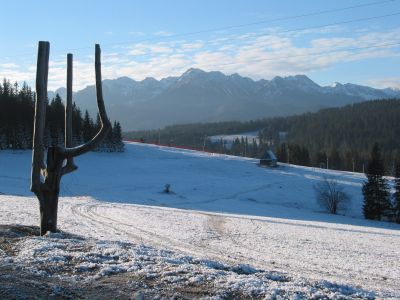 Winter is expected to hold fast in the mountains for at least a week. Over thirty centimeters of snow has fallen on Kasprowy Wierch in the Tatra Mountains this week.

Thermometers showed temperatures plummet to 4 degrees Celsius. Nearly half a meter has fallen in the area of Morskie Oko and the Hala Gasienicowa. Standing in Zakopane, one can see the white capped peaks of Gubalowka and the Wielkie Krokwy.

Although snowfall during this time of the year is not unheard of, half a meter of snow is indeed considered unusual. The mountain emergency rescue services (TOPR) have announced a grade 2 avalanche state of emergency. The snow that has fallen is wet and can slide off ridges easily, as the temperatures stay above zero. Hiking enthusiasts have been caught off guard with the rapid change in the weather. September, usually considered a preferable month for hiking due to the smaller crowds, has this year impeded the trekkers.

An avid hiker from Krakow says he came with all the right warm clothes and rain gear but didn’t think to take his cramp-ons. Unable to reach the higher peaks, he was disappointed to trek in the lower parts of the mountain ranges only. Tourists are being warned of the rapidly changing conditions and are being asked to be well-prepared when trekking. Rainfall momentarily changes to snowfall and can make walking conditions all the more difficult. Sturdy footwear, wet weather gear and warm attire are essential. Checking weather forecasts and hiking information at the national park center is also recommended. The TOPR statistics show that in the last month alone there were 55 incidents in the mountains where tourists were involved. Three accidents involved mountaineers.

One person died and thirty four were injured. Since January of this year, some twelve persons have died in the Tatra Mountains. The good news is weather forecasts predict that sunny days will still be seen in September. According to meteorologists, the harsh weather changes seen early autumn may be a sign of an excellent skiing season ahead.

The mountains being a short drive south of Krakow means great opportunities for skiing and snowboarding enthusiasts. Zakopane, the heart of the mountains, is well connected by private coaches as well as rail from Krakow. Weekend skiing trips and after-work night skiing are all forms of recreation enjoyed by Krakow’s locals. Perhaps we shouldn’t complain too much about the awful week of weather we have been having, if it means that a white winter awaits.