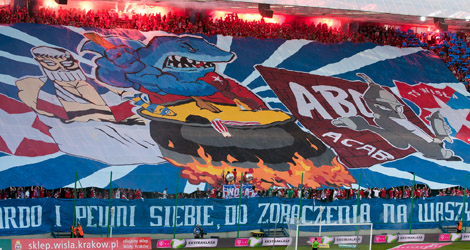 It was anything but Total Football, but the so-called ‘Holy War’ between Wisła and Cracovia was a match that will be remembered for a long, long time by both sides – as a single goal earned the points for the White Star and condemned the Pasy to relegation.

A free kick from Maor Melikson on 29 minutes, and the resulting goal, was all it took to plump the chests and egos of the hosts Wisła, and dump Cracovia from the Ekstraklasa. Never magnanimous in victory, the overwhelming Wisła crowd launched into a rendition of the classical song Time to Say Goodbye on the final whistle.

Other than sending their arch-rivals into another chapter in their yo-yo history, there was nothing to be gained for Wisła from the derby victory. Their season is over, bar a couple more games that mean very little in the scheme of things.

Off the pitch, police were forced to intervene as emotions boiled over and supporters began ripping up and hurling seats at each other. Just six minutes before half time, the atmosphere at the Wisła stadium became thick with the smoke of firecrackers.  Wisła supporters appeared to hurl firecrackers at the Cracovia goalkeeper Wojciech Kaczmarek, delaying the start of the second half slightly, but the player was not injured.

At the time of publication, it was not known how many, if any, arrests were made.