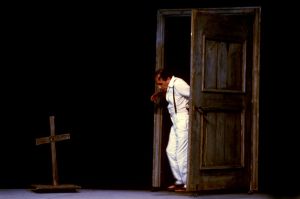 While we wait for the Tadeusz Kantor museum in Podgorze to become a reality, a series of exhibitions and lectures has started up in the unrenovated interiors of the old power plant on the Vistula (ul. Nadwislanska 4).

At present you can see a film/installation exhibition of a little-known Kantor work, “The Return of Odysseus,” an underground and independent theater production that was staged in a private apartment in Krakow in 1944 – that is, while World War II was still raging all around. The exhibit is simple but effective. The visitor enters a large black space, where a film showing the surviving photographs of the performance is looped against a large screen.

The photographs allow the viewer to trace the play, and are interspersed with (Polish language) texts to explain the action as it goes along. To the right of the screen is an illuminated area which holds the actual props that remain from the original performance.

As the visitors watch the play, a film of the historical events of 1944 is projected behind them on a second screen – forming a historical and literal background to Kantor’s production. The photographs are fascinating for a number of reasons. Most obviously, because of the context(s): the clandestine theater in the private apartment, the staging of Greek myth in the face of nearly unprecedented real tragedy outside. There is also the context of Kantor’s own work: his second-to-last play, only two years before his death, was entitled, “I’ll Never Return Here,” alluding to both his death and to these underground beginnings. But the photographs also have their intrinsic interest.

They reveal a Kantor who was influenced by theatrical constructivism (e.g. Meyerhold, Mayakovsky), though this is even more evident in his underground staging of Slowacki’s “Balladyna” in 1943. It is one of few plays by Kantor that was based on a text by another author (Witkacy and Slowacki are other early examples). In other words, they reveal a Kantor whose influences became barely discernable in his later, more freely-developed masterpieces of the 70s and 80s. In these latter productions, Kantor emerged as a seemingly singular phenomenon, and these early images allow us a glimpse at how he might have been inspired.

The Cricoteka Tadeusz Kantor Institute will shortly be releasing a series of five DVDs with documentary materials on Kantor’s plays (including “The Return of Odysseus”) with English subtitles, to hopefully bring the work of this brilliant figure to a wider public. The “Return of Odysseus” exhibit will continue until September 22.