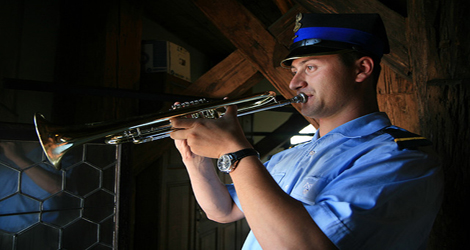 A centuries-old Krakow tradition has come under fire from the English tabloid press, who fear that it may hamper the England team’s chances of winning the European football championships.

The hejnał mariacki – the bugle call that sounds from the tower of St Mary’s Church in the main square every hour on the hour – is, according to the Daily Star newspaper an ‘ear-splitting’ racket that will prevent the players from sleeping at their base, the nearby Stary Hotel. The story was quickly picked up – and laughed down – by the Polish press. It follows features in the Sun newspaper earlier this year, about the ‘poor’ state of England’s training ground, the Hutnik Stadium in Nowa Huta. The city council wrote to the Sun after the feature was published, saying that the FA were happy with the facilities, and that the stadium would be fully ready before the England squad arrives in Krakow.

The hejnał mariacki is rooted deep in legend. It is said that a watchman began playing to warn the city’s residents of an attack by Tartar warriors. Now, when the tune is played, it ends abruptly, as the story tells that the watchman was shot in the throat by a Tartar arrow.

While the Daily Star fears that the players will be too tired to perform well on the pitch – due to their location in the heart of the city’s party zone, as well as the bugler – Gazeta Krakowska reports that their wives and girlfriends will face similar problems at their temporary home. It is understood that the WAGs will stay at Hotel pod Róża, on ul. Floriańska.

Olga Wojcik, director of the four-star hotel, told the newspaper: “It is true that people associated with the England representatives will stay with us. I cannot say any more.”