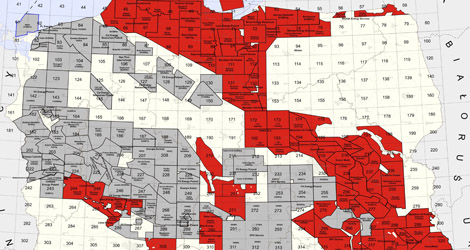 The latest geological studies have cooled excitement over the extent of shale gas reserves in Poland, but are not entirely pessimistic. According to these studies, Poland has five times more gas and ten times more oil in shale deposits than in conventional deposits.

The latest estimates, published by the State Geological Institute (Państwowy Instytut Geologiczny) on March 23, put Poland’s total reserves of shale gas at between 346 and 768 billion cubic metres. This is far less than the 5.3 trillion cubic metres suggested by a US Energy Information Administration report published last year. US rating agency Fitch believes it would still be cost-effective to extract shale gas from Polish resources.

As well as looking at the prospects for Polish natural gas, state geologists also looked at possible oil deposits, and came up with a figure of between 215 and 268 million tons – ten times more than previously thought.

But not all experts accept the new findings. The State Geological Institute’s research was carried out using the methods and with the assistance of the US Geological Service, but Poland’s chief geologist, Piotr Wozniak, has dismissed its report as ‘outdated.’ He points out that the only data used was from wells sunk between the 1950s and the 1990s – the report did not take into account data obtained from the 22 new, exploratory wells sunk by international oil and gas companies over the past year.

Some Polish geologists are also questioning the methods used by the Institute. “It’s a preliminary report,” said Prof. Jerzy Nawrocki, head of the State Geological Institute, adding that these estimates will be updated as more data becomes available.

And much more data will become available as oil and gas companies continue to explore. Companies issued drilling licences by the government are required to drill a certain number of exploration shafts – there should be 127 of them by the end of 2017.