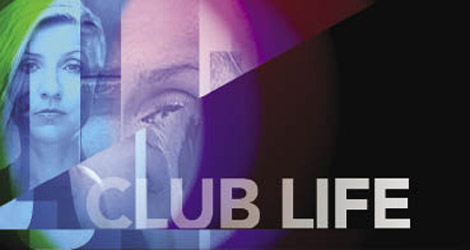 Poland loves Port-Royal and it seems Port-Royal loves us back, swinging through Poland on tour so much you’d think they were Icelandic. It’s hard to believe these young guys (who are actually Italian) have been together for over 10 years, but they’ve just recently released a double LP of remixes and rarities spanning their relatively long career. As always, it’s nice to see electronic music performed live, and Port-Royal even top it off with live, handcrafted visuals as well. Opening the concert are electronic duo Fuka Lata.

When a band names itself after the New York venue that hosted The Velvet Underground’s Nico’s first gigs, you know there’ll be some psychedelic sonic spirals in their DNA. Germany’s Blue Angel Lounge do a solid job of recreating the dark, romantic washes of sound of their inspirations, while keeping a modern perspective. Also performing tonight are Warsaw’s The Phantoms, as well as special guests The Pleasure is Mine, and Third Wave Romantics to close the party with a synth-punk DJ set.

California hip-hop artist Raashan Ahmad is one of this month’s most interesting live music offerings in Krakow. His impressive history of recordings, including his latest LP For What You’ve Lost (feat. Gift of Gab, Aloe Blacc and many more), and a league of international admirers has had Raashan on what appears to be a permanent worldwide adventure. Even tastemaking BBC DJ Gilles Peterson is a fan. Tonight, Raashan will perform with Polish DJ Czarny/ Tas – make sure to check out their collaborative tune “Fight!” up now on YouTube.

This month’s Loud & Clear features Sopot-based underground house DJ and producer Miko Czajkowski at the helm. Also performing is host Big#Time, as well as the amusingly named Justice Beaver, who seems to revel in describing himself (or herself?) with a sub-genre spawned from the depths of the internet a few nanoseconds ago – seapunk. In true punk style, the genre seems to reject any actual musical categorisation, aside from its steady combinations of turquoise, dolphins, and 90s rave nostalgia. At any rate, we can expect a healthy combination of bass music bangers and deeper house dancefloor fillers.

Online cultural corner Tapczan has organised a concert series of largely Polish experimental rock acts (many associated with the Lado ABC label) throughout the spring. The first few concerts took place in late March (Lüger, Bad Light District, Baaba, 3MoonBoys). This month, we can expect concerts from the likes of NP (aka Napszykłat in Betel – 13.04), Kristen and Ed Wood (Re – 14.04), and Trupa Wertera Utrata and Bubble Pie (Re – 15.04). Head to www.tapczan.info to read more about the Fiesta, and listen to clips of all the participating bands.

It’s a student battle of the bands this weekend at Rotunda, where those who passed into the semi- finals will duke it out for the top spot at the Przegląd Kapel Studenckich (Review of Student Bands). The festival’s website (pks.rotunda.pl) has full details on daytime activities which include instrument workshops and discussions with some of the jury members. And if you feel like hearing some professional artists at work, each night closes with a performance by a well-known Polish band like L.Stadt, Tymon Tymański & The Transistors, and Łaki Łan.

House diva and much-respected figure in the Polish electronic scene Novika returns to Krakow with her Beats Friendly partner Mr. Lex for a performance in the up and coming Pixel club. Known for her multiple roles as a DJ, vocalist, journalist, and radio host, Novika has collaborated with countless Polish artists (Smolik, Fisz, and Marcin Czubala to name a few) and is particularly fond of supporting emerging talent. Łódź-based electro band Axmusique, Junkie Punks, and Dominik Szczepaniak also perform tonight. Entry 5/10 złoty.

After a handful of years of touring ,a very well- received debut album in 2010 (Malenka), as well as 2011’s Dlaczego Nie, Dagadana have earned plenty of fans in Poland and have even played many gigs abroad from Morocco to Malaysia. The Ukrainian- Polish trio specialize in easygoing folk combining jazzy instruments with electronic bleeps and bloops. Also scheduled to perform is singer-songwriter Coldair, also known for his work with the band Kyst, as well as Low-Cut. Tickets 10-20 złoty.

Noted member of the trendy chillwave (think Neon Indian, Toro Y Moi) movement and British Columbia native Teen Daze will bring his lo-fi dreampop sound to Krakow this month. But Teen Daze’s discography can easily disperse any notions we might have of his sound being just a fad – nobody would record 7 EPs and countless remixes just to be cool (hopefully). Coming soon in May is a full-length too, under the title of All Of Us, Together. Lucky for us the vast majority of Teen Daze’s back catalogue is up for streaming at teendaze.bandcamp.com. Fellow synth junkie Brothertiger completes the line-up.