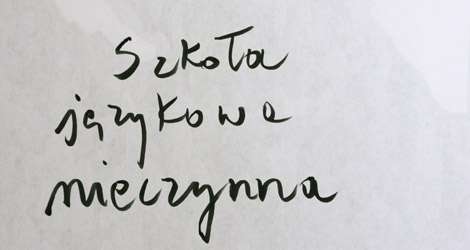 Several hundred students and many teachers were left out in the cold when the K&S language school in Krakow suddenly closed in March. Unpaid teachers and students who have forked out in advance for lessons are threatening legal action, but the owner has gone to ground. The public prosecutor is looking into accusations that course fees were taken when the school had no intention of providing lessons.

The school had been closed for a few days when the administrator and police forced their way into the building. Almost all the school’s equipment was still there. As the Krakow Post went to press, there was no clear explanation as to why K&S Krakowska Szkoła Języków, based on ul. Karmelicka, had closed down. It is especially surprising given its recent heavy advertisement campaign via Groupon – a website offering discount vouchers and deals on goods and services across the globe.

The K&S school offered courses in English, German, French, Spanish, Russian, Italian and Swedish costing between 370 and 600zł per semester. The school also has branches in Gdańsk and Wrocław, which have also closed, leaving students and teachers out of pocket. A YouTube video shows a disgruntled K&S teacher taking a computer from the school, presumably in an attempt to recoup unpaid wages. It is estimated that each K&S teacher is owed about 5,000zł.

“I am shocked. Just a week ago the school held classes from morning until evening and was recruiting new people through Groupon. Then, one Monday, we find it closed, and just a short note on the door,” said Michał, who was studying Italian at K&S.

“I bought a course in Russian through Groupon last autumn. The first semester went fine. Problems started in the new semester. Classes started later than expected, and some of them were cancelled without notice,” said Anna Rutkowska, another K&S student.

Some students were sent an email on March 19 saying that the school felt responsible for its students, but regretted that it was unable to continue providing the high quality lessons they deserved. A post on the school’s Facebook page reads: “The semester will resume as soon as possible. Please give us a few days to resolve the situation.”

The school’s four-person board resigned in mid-March and went to the public prosecutor with their suspicions that the school’s owner was signing up new students with no intention of providing lessons and was deliberately delaying payments to teachers and other staff. The owner’s name cannot be published under Polish press laws.

Groupon has announced that customers who bought coupons for K&S through its website will be offered alternative courses within a week or have their money returned. But students who paid for courses directly are considering joint legal action against the owner.

There are several thousand language schools in Poland, but very little regulation controlling their activities. Jacek Członkowski, head of the Polish Association for Standards in English, has commented that the only specific regulations that apply to private language schools are those under Polish or European certification procedures, none of which are compulsory. K&S had no such certificate. “Problems within language schools happen, as in every other business, but spectacular bankruptcies are not common,” said Mr Członkowski. He advised aggrieved parties to take legal action.

Photo: A laconic note attached to the door announcing the closure of the school (By: David McGirr)

One thought on “Language School Under Investigation”