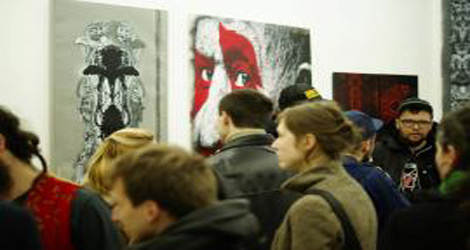 Where does art belong? And specifically, can street art function when ripped from its natural environment and displayed in a gallery? These are among the questions that a unique exhibition – and the first of its kind in Krakow – has raised.
Kicking off at the end of March, All That Street Art  drew a massive crowd for the opening party at the Art Agenda Nova gallery, which later spilled over into Klub Pauza.
Organised in co-operation with the Wschod Sztuki Foundation and  the KRK:Loca®tor project, the exhibition is based around the works of some of the best-known names on the Polish street art scene, including Ania Brandys, Brems, Coxie, Czarnobyl, Massmix, Nawer, NeSpoon, Pikaso, Roem, Artur Wabik and Zbiok. These artists, who both draw upon and indentify with the street art scene, share a common creativity which operates on the periphery of street art and other artistic disciplines, including painting, design, and even conceptual art.
The works included in exhibition  are varied, thus eluding strict categorisation and demanding of the viewer a broader interpretative approach.
The goal of All that Street Art is to  create a dialogue between critical voices which have arisen around the argument that the natural
environment for such works is the street, not the gallery. Judge for yourself, until May 15, at Art Agenda Nova Gallery, ul. Batorego 2 (2nd floor). Open Mon-Fri, 11am-6pm. Picture: All That Street Art opening party, Art Agenda Nova Gallery.