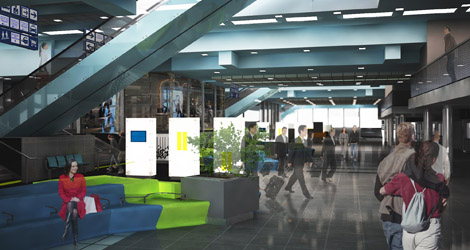 Renovation work at Krakow’s main railway station will not be complete in time for the European football championships in June, after project managers admitted the job was bigger than expected.

When work began revamping platforms, passenger areas and tunnels, back in the autumn of 2010, it was claimed that the first passengers to benefit from the improvements would do so at this summer’s tournament. However, revised estimates put the completion date in late August or early September.

Thousands of football fans are expected to head for Krakow for the tournament. Although no matches will be played here, the England, Italy and Netherlands teams will live and train in the city. A huge fan zone will be set up on the Błonia common in the city centre, between the Cracovia and Wisła stadia.

A spokeswoman for PKP, the Polish railway operator, said everything in the original plans had gone according to schedule. But, she added, the delay will be caused by additional renovation work that was not included in the original plan. She told the newspaper Gazeta Wyborcza that the original work would, in fact, be finished for the tournament, but that facilities would not be accessible until the entire job had been signed off. PKP has also said that it needs more time to ensure fire safety measures could be properly implemented.

The overall project is expected to cost in the region of 130 million złoty.

The pedestrian underpass connecting the square in front of the station to the city centre is also being refurbished, but is not due to be completed until months after Euro 2012 is over.