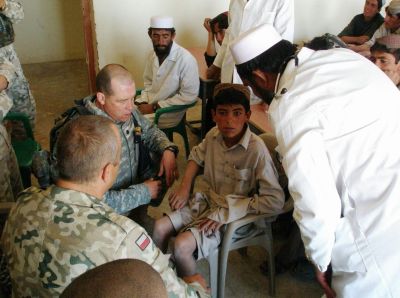 Nations can be triumphant in war by defeating the enemy on the battlefield ? or by winning the battle for “heart and minds” with kindness and good will. This is why Polish military leaders in Afghanistan decided to launch a friendly offensive expanding the mission there from fighting terrorism and the drug cartel to medical concern and care.

A group of medical volunteers is being put together to provide care for Afghan civilians. A special program to send groups of a few doctors at a time to Afghanistan is being prepared in the Ministry of National Defense, Minister Jaroslaw Rybak told the newspaper Dziennik Zachodni.The volunteers ? doctors, nurses and others with medical expertise ? will assist local Afghans with medical problems. “We’ve already collected some applications and now wait until all (legal) complications are solved,” Rybak said. He said it would be “a few months” before the first group goes to Afghanistan. Polish troops in Afghanistan want to repeat a similar program started in Bosnia Herzegovina and continued in Iraq.

They want to win the local people’s hearts and minds, they say.”We can do it,” one doctor said, pointing out that Polish troops proved it in Bosnia and Herzegovina. The number of attacks at Polish bases in Iraq continues to fall. It was 10 times lower in August than July. This decline is attributed to the positive consequences of the Polish contingent’s change of tactics on the one hand and of the way Polish soldiers treat the local population on the other.

An example of winning local inhabitants’ hearts and minds on military missions is seen in the so-called called “white Tuesdays.” They have been organized for some time in Iraq. People stood in line at Polish medical tents to receive care and medicines..Alim Al Hariri, an Iraqi volunteer in the Polish army, told Dziennik Zachodni about making friends with Al Kud inhabitants. Al Kud is a large logistical base where important patrol forces are stationed.People from throughout the province attend white Tuesdays.

The hospital is equipped with the best medical tools. And the staff consists only of the best specialists. There are also Iraqi hospitals n Al Kud but they are in poor condition.”The medical care is open to anyone needing help,” said one volunteer. “We also have ER service. We have gained such a good reputation that long lines often form at the gate of our base. People travel hundreds of kilometers to reach our doctors.”