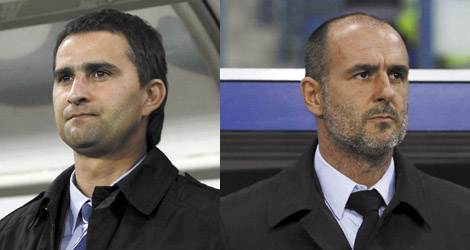 This has been a year of unrest for Krakow’s two major football clubs as disappointing results have mounted over several months.

Wisła, long accustomed to competing for league titles, has replaced beleaguered manager Kazimierz Moskal with journeyman Michał Probierz as the club continues to toil in the middle of the league table.

Worse yet, Cracovia have found themselves firmly entrenched in the releagation zone, sacking Dariusz Pasieka in favour of Tomasz Kafarski, the former manager of Lechia Gdańsk.

These are the second in-season managerial changes for each club since the Ekstraklasa season began last summer.

Wisła’s 0-1 home defeat to Korona Kielce all but sealed Moskal’s fate as the club management felt compelled to inject new life into the team by signing Probierz until the end of next season.

Although Moskal led Wisła to their first knock-out round of the Europa League, his 2-1-3 record fell well short of the club’s standards.

Probierz had most recently spent spent two months at the helm of Aris Thessaloniki. His last stint in Poland ended in November when he abruptly left ŁKS Łódż to take the position in Greece.

Outlining his goals for his new team, Probierz said: “It is difficult to change everything at once, and after consultation with the people from the coaching staff, I know that the team is well prepared for the season. Now we want to improve some things.”

The new manager had time for only two training sessions with his squad before their away match against a weak Lechia Gdańsk side, which resulted a in 2-0 victory for Wisła. Despite this promising start, the club has collected only two points in three league meetings since.

On the plus side, Wisła has progressed to the semi-finals of the Polish Cup after a pair of 1-0 victories over Lech Poznań, who have had their own struggles as of late. At this stage, it appears that the cup would be Wisła’s only realistic way to return to European competition next season.

Meanwhile, Cracovia have dismissed Dariusz Pasieka after an embarrassing 0-2 home defeat against Zagłębie Lubin – a team that started the match in last place in the Ekstraklasa table, a spot that the Pasy now currently occupy.

Pasieka is no stranger to termination, having left Arka Gdynia under similar circumstances last spring. He exits Cracovia with a record of 3-5-5 during his tenure, during which his side accounted for only five goals.

Pasieka had, by all accounts, lost the confidence of his players, as well as the club’s paying customers. After the sacking, Cracovia chairman Janusz Filipiak stated: “The fans demanded a change, journalists exerted pressure, so we made this move. I am not convinced that the change occurred at the best time.”

Cracovia were forced to conduct a rapid search for Pasieka’s replacement and settled on Kafarski, who promised more offensive play from the team: “I want to change Cracovia’s style of play. I hope that the game and the training will make everyone happy,” he said.

His tenure began with a 2-2 draw at ŁKS Łódź, followed by successive defeats to Śląsk Wrocław and Górnik Zabrze. In the meantime, commentators and fans alike agree that any improvement for Cracovia must start with a change at the top.

At Wisła, Bogdan Basałaj resigned from his position as president in mid-March amid the club’s ongoing financial troubles. Both teams have a lot of rebuilding work to do this off-season if they want to reclaim the glory of past years.