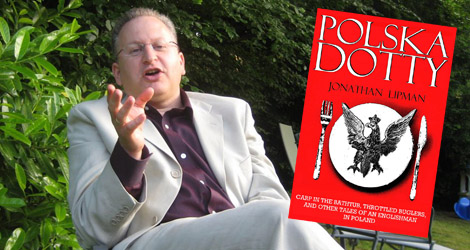 Ex-pats living in Krakow will find plenty of reasons to nod in agreement and raise a smile at a new book about an Englishman’s encounters with Poland.

Jonathan Lipman found himself proposing to his girlfriend Marzena in a city centre bar, knocking over a beer in his nervousness. She accepted nevertheless and the couple embarked on what was, for Jonathan, a journey into an unknown and alien culture.

The resulting book, Polska Dotty, is full of the kind of anecdotes that anyone who has moved to Poland from the UK will recognise instantly, from the holiday traditions observed in Polish homes, to the sometimes quite blood-boilingly difficult bureaucracy that one encounters in even the most prosaic of situations.

And of course, it serves as a primer for those three most ingrained aspects of Polish culture – language, religion and family, attitudes that can be among the most difficult hurdles for any newcomer to overcome.

Much of the book is focused on Warsaw, which is where Jonathan and Marzena eventually settled; but it’s clear that Krakow has a very special place in their hearts, as the city in which they courted and married, and the home to their favourite restaurant (you’ll have to read the book to find out which).

Available from Amazon for the Kindle reader, Polska Dotty is also worth taking a look at if you’re new to life in Poland, or considering making the move here.

3 thoughts on “Mad About Poland?”