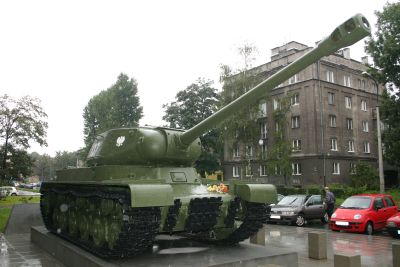 Nearly a year was spent renovating the IS-2 tank that has been standing before the Museum of War Effort for over 40 years. The World War II monument’s temporary removal proved how integral the symbol is to Nowa Huta’s Osiedle Gorali residents, where the museum is located. Last Saturday the steel giant was put back in its place looking shiny and new.

Specialists from the Museum of Aviation began renovations in October 2006, reworking the old worn-out lacquer and rusted steel. Its previous condition was becoming a health threat to kids who enjoy playing around the tank.The renovation took longer than expected when costs exceeded original estimates and additional financial donations were needed to finish the work. Fortunately Nowa Huta residents were eager to donate more than 10,000 zloty to finish the project.

However, some war veterans weren’t too anxious to have the tank returned to the museum. They argued that since it was named IS-2 after USSR dictator Josef (Iosif) Stalin ? the Soviet Union invaded Poland in 1939 and controlled it until 1989 ? the monument doesn’t belong in Krakow. Despite the objections the tank was returned, driven on a truck platform from the old Czyzyny airport to Osiedle Gorali in an hour.

The IS-2 codename was removed from the side plaque and replaced with the title, “Heavy Tank,” and a description of its journey during World War II.The tank is another symbol of Nowa Huta, an easternmost, once working-class district of Krakow built in the 1950s as a huge steelworks center. Since the 1960s, when the Polish Army relinquished it to the Museum, the tank has become Nowa Huta’s personal World War II memorial.