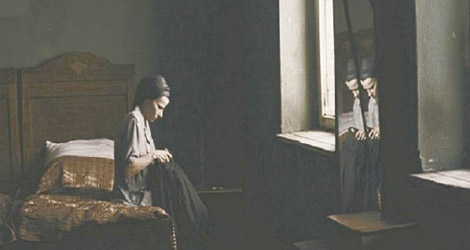 Once again, Wojciech Smarzowski ends a movie with a high-angle shot that draws back from the human level to reveal the landscape. In Smarzowski’s previous feature, Dom Zły (The Dark House, 2009), the camera turns from the scene of the crime to show the tiny figures of villagers set against a Brugel-esque panorama. In Róża (2011) it soars above the heads of the characters to show a wasteland reminiscent of a Western. Smarzowski’s drama takes place during the ‘Weryfikacja’ program in Mazury following World War II, during which the Communist authorities divided the population into those ‘verified’ as Polish and those ‘unverified’ and, therefore, regarded as ethnic Germans. Tadeusz (Marcin Dorociński) a former Polish officer who has survived the Warsaw Uprising attempts to start a new life in Mazury by helping war widow Róża (Agata Kulesza) to rebuild her farm. He does his best to protect her property and person from marauding Soviet soldiers involved in the verification process, and the forced deportation of ethnic Masurians. There is no law in a war-ravaged territory where mines are used to mark and defend the borders of Róża’s property. From a moral point of view Róża is a Western crammed with violence but filmed without complacency. Smarzowski ironically referred to himself as the “third Cohen brother” in a recent interview, and there may be a kernel of truth in this, at least in his commitment to injecting a dose of realism into movie genres that have never been fully developed in Polish cinema. 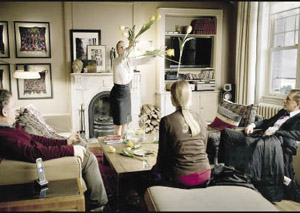 At first glance, the fight between two boys in Central Park shown in an opening long shot does not look like a casus belli. Unlike Sam Peckinpah, Roman Polanski does not linger on the cruelty of children, which is here taken for granted in the morally corrupt universe of his films. The camera stays back from the infantile fray and turns instead to the adult world as the parents of the brawling kids meet to discuss their offspring’s behaviour. The hosts are Michael (John C. Reilly) and Penelope Longstreet (Jodie Foster) and the visitors Nancy (Kate Winslet) and Alan Cowan (Christoph Waltz). The stage is set for an initially civilised conversation that descends into vicious verbal carnage. As in Luis Buñuel’s classic The Exterminating Angel (1962), the characters are mysteriously unable to leave the apartment, although nothing physical is holding them. It is the pressure cooker atmosphere and spiteful but brilliant dialogue that attracted Polanski to Yasmina Reza’s 2006 play God of Carnage, on which this film is based. The quartet of actors delivers top-notch performances with Waltz confirming his creative flair using a grotesque repertoire made up of sudden chuckles and grunts. Eventually, the four adults descend to the thuggish level of Polanski’s juvenile short Rozbijemy Zabawę (Break Up the Dance, 1957). It is interesting to speculate on what Hitchcock might have made of Reza’s oeuvre. 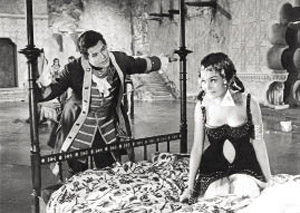 Directed by: Wojciech Jerzy Has

Small wonder that Has’ early showpiece has attracted devotees among illustrious film directors including Scorsese, Coppola and Buñuel. Rękopis Znaleziony w Saragossie is based on the labyrinthine 1815 novel of the same name by Polish Enlightenment polymath Jan Potocki. What drives fans to return to this film time after time? It’s the fact that, eventually, the pleasure of getting lost in the multi-layered plot prevails over the headache of thinking through its interpretation. As enigmatic as a painting of the Ferrarese School, the film follows the dream-like journey of Alphonse van Worden (Zbigniew Cybulski) into the maze of the Spanish Sierra Morena, here represented by the odd landscape of the Polish Jura. His inner conflict between reason and imagination eventually pushes Alphonse into madness, as the epilogue suggests. In terms of narrative technique, Rękopis Znaleziony w Saragossie represents a triumph of Baroque wit combined with Surrealist imagery and applied to cinema. The set, overloaded with skulls and tarot-like patterns, is the work of the painter Jerzy Skarzyński, who contributed to many of Has’ imaginative films including Sanatorium pod Klepsydrą (The Hour-Glass Sanatorium, 1973). A master of digressive technique, Has is never afraid of losing himself or the audience in his mould-breaking visual poems.