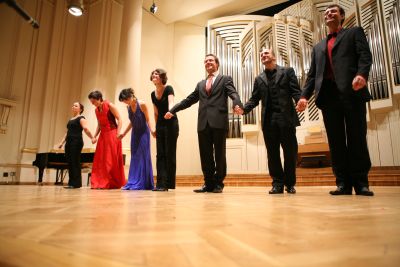 There is a particular memorable moment in Julio Cortazar’s “Hopscotch” where the protagonist attends a concert of avant-garde classical music to escape from a rain storm. The few other people attending the concert gradually disappear, until the protagonist is left alone with this woman on stage, vainly exerting herself to play some grotesque atonal composition.

It’s a horrible image, and one that unfortunately only slightly exaggerates the gloomy position of modern classical music in the eyes of the general public. Of all the contemporary art forms (excluding, perhaps, poetry), modern classical music finds itself most widely dismissed, misunderstood, scorned and scoffed at. And so it was disheartening, though perhaps none too surprising to find myself one of exactly fourteen spectators of the trials of the 11th International Competition of Contemporary Chamber Music (August 30-September 1), including the five jury members and at least two or three other journalists. This lack of public enthusiasm is in no way due to the quality or importance of the festival. The participants I saw were nearly all highly talented, the prize-winners represented a very high scale of achievement indeed, and the festival has, over its eleven editions, been slowly gaining a kind of minor prestige in the field. No, the sad fact is that people simply do not like this music. This is a great shame. Sitting for free in the lovely new music school auditorium, one could hear Ayako Kitanaka’s (Japan) sometimes frantic but very knowledgeable renditions of Bacewicz and Szymanowski (the latter is really a bit too old for this festival, though he does sound surprisingly modern, perhaps because his music has been assimilated so much less than, say, Debussy’s or Prokofiev’s), followed by the Polish accordion/cello duet of Adam Misiak and Jacek Malachowski, whose first piece sounded like a more sacral Shostakovich and whose second (Wojciech Blecharz’s In My Head) was a delightfully spastic , romping, staccato thing that exploited changes in dynamics to very good effect.

Other performers availed themselves of double-belled trumpets (Paul Hubner/Germany), marimbas (a rather popular instrument at this year’s festival) or saxophones, plucked at piano strings or played Krakow’s Hejnal on a clarinet with the top half removed (3rd-prize winning Conash Trio from Poland/Japan). With all this eclecticism one might rightfully wonder if the music would get lost in the fray, but mercifully this was seldom the case. Granted, Hubner’s double-trumpet was not always a joy to listen to, and some of the instrument combinations ? such as the Feel Free Trio’s (Poland) clarinet/bassoon/oboe ? were not as electrifying as others, but one went away with the general impression that there was a marvelous richness here, rather than a pointless variety. This point was underscored by the truly remarkable performances at the final concert (Philharmonic, September 1, 19:00).

Both Grand Prix winners ? the prize was shared for only the second time in the festival’s history ? showed a truly superior range of abilities. The Berlin-based Berolina Trio (Poland/Germany/Japan) performed a Wolfgang Rihm piece in a way that both vigorously interpreted it and made it legible for someone (such as myself) who was hearing this composer for the first time. A combination of passion, confidence and intelligence that seemed uncanny in a group so young. The other Grand Prix winners (Sonic.Art Quartet/Germany) performed the great Gyorgy Ligetti’s Bagatelles on four saxophones, a skittering and oddly affecting work, with a sense of communication more frequently seen among jazz musicians than classical ones.

I don’t believe I have heard the saxophone sound quite the same way. Of the two first-place contestants who did not win the Grand Prix, Bartosz Koziak (Poland) played Xenakis in a way that reminded the listener that the cello was an instrument made of wood and metal, in other words a grating and not always likeable piece, but compellingly performed. The Piano Duo LP from Serbia performed a rendition of Mauricio Kagel that in lesser company would have been a worthy Grand Prix winner, and which certainly made me want to find more music by Kagel.

Rounding off September 1 was a performance by Krakow’s own Motion Trio, who won this very competition seven years ago and have since gone on to have an international career that will include a date at Carnegie Hall this January. As such, they are a kind of beacon for young students of new music, showing that the yawning chasm between this new music and the public at large can be bridged ? with a great deal of energy, talent and a sense of humor.