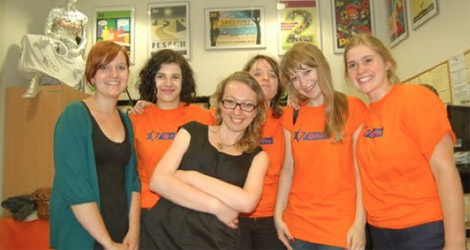 “We feel safe here. We want to show the world that Poland is place of Jewish life and not of Jewish death,” says Jonathan Ornstein, director of Krakow’s Jewish Community Centre (JCC).

Voicing a feeling of safety seems like a mild claim, but it’s not something that all Jewish communities in 21st century Europe would automatically affirm. It’s even more extraordinary given that this Jewish community lives in a place that is a symbol of European Jewish tragedy.

Just an hour from Auschwitz-Birkenau, Krakow is home to a fledgling Jewish community. But this is a community more interested in gay rights, vegetarianism and street art than dwelling on the harrowing chapters that have punctuated the history of Judaism in Poland.

The community around the JCC is young, progressive and has its eyes firmly on the future. Ornstein has some interesting perspectives on the revival of Jewish life in a country that has faced repeated accusations of anti-semitism.

“Krakow is a unique platform for this revival. We are the community near Auschwitz, a symbol of the worst thing in Jewish history, but there is an energy in Krakow we are able to capitalise on and a desire to connect to Jewish culture we could not have expected.”

But is Krakow an atypical bubble in Poland? Only last weekend vandals defaced a Jewish cemetery in Wysokie Mazowiecki by daubing swastikas and the slogan ‘This is Poland not Israel’ on graves and monuments to those killed during World War II.

Add to this a recent survey carried out by the New York-based Anti-Defamation League that found anti-semitic sentiment in 48 per cent of Poles questioned. This compared to 10 per cent in the Netherlands, 17 percent in the UK and 63 per cent in Hungary.

According to Ornstein, the Jewish community in Krakow actively challenges these prejudices.

“Our student club do presentations around Poland to talk to non-Jewish students about Jewish life. The goal is to say to them: ‘Look Jews don’t dress how you imagined them back in 1939. We don’t wear traditional clothes and beards. We’re young. We look like you.’ This is a huge component of our student program and it’s focused on reaching out to the wider community through education.”

Alicja Beryt, a 26-year-old philosophy student from Poznań, moved to Krakow to study and connect with what was then a community in the shadows.

“When I first moved to Krakow we had five or six people at Shabbat dinner, now we have up to 70. A lot of these people were already living in Krakow but there was little community spirit. Bit by bit the movement gained momentum, but not without challenges.”

The presence of a Jewish community in trendy Kazimierz – an area thronging with cafes, art galleries and vintage shops –  is becoming one of the quarter’s defining characteristics. Post-war Kazimierz’s was beset by neglect and criminality, but the last decade has brought a remarkable turnaround in its fortunes.

For Ornstein, this new vitality is a testament to the revival of Jewish culture in the city: “Jewish tourists come here and expect to see death in a place that is essentially, for them, a cemetery. Instead they are confronted with the opposite. A growing, thriving community in a city that has little anti-semitism, especially compared to other European cities. We feel very normal here.”

The success of the community reached a new high last month when they held their first bat mitzvah for a young girl from Krakow. This everyday Jewish ritual would have been unimaginable just a decade ago and is emblematic of what this small community has achieved.

“For me ,the interesting part was how normal the whole thing was. She grew up Jewish, her friends know she is Jewish. There was no secrecy or emerging from shadows. It reminded me of the bat mitvahs in my native New York,” said Ornstein.

Ornstein believes this openness in the celebration of Jewish identity is becoming an everyday occurrence thanks to the support of the wider community.

“I see the Jewish Community Centre as a community centre first and foremost. I think there are values which we see as not exclusively Jewish values but the values of being open and tolerant – values we try to promote. We cooperate with Queer May, women’s groups and vegetarian groups. A whole plethora of organisations contribute to our view.”

This pluralistic vision has brought together a community that is growing in size and dynamism as it slowly reawakens the Jewish heart of Kazimierz.