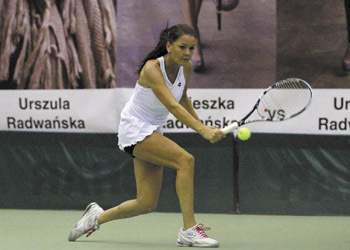 After winning her eighth WTA tournament at the Dubai Tennis Championships, Agnieszka Radwańska has risen to no. 5 in the world rankings. Radwańska struggled early in the tournament, needing three long sets to get past Polish-Canadian Aleksandra Wozniak in the first round, but she eventually went on to defeat Julia Görges of Germany 7–5, 6–4, in the final. Radwańska is now the first Polish player to surpass $1 million in career earnings.

The Wisła Can-Pack women’s basketball team advanced to the EuroLeague Final Eight in Istanbul after eliminating USK Prague 2-0 in their best-of-three series. In Krakow for Game 1, the hosts had four players score at least 14 points in their 66-52 win. It was more of the same in Prague as Wisła controlled the tempo with a 74-60 victory. Ewelina Kobryn led with 22 points as Milka Bjelica contributed a double-double.

A boisterous home crowd greeted Justyna Kowalczyk for the first cross-country World Cup event on Polish snow, and she delivered by winning the 10km classical race at Szklarska Poręba. Kowalczyk had unexpectedly lost in the quarter-finals of the sprint event one day earlier before redeeming herself to take the lead in the World Cup overall classification. The cross-country season concludes March 18 in Falun, Sweden.

Kamil Stoch captured his second gold and seventh podium of the season on the large hill at Val di Fiemme. In 3rd place after the first round, Stoch’s second jump of 131.5 m was enough to edge Austria’s Gregor Schlierenzauer for top honours.