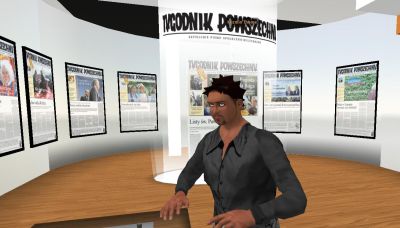 A few weeks ago Krakow became Poland’s first virtual city in the popular online game Second Life, where players create a character who can travel, work, bargain, eat in restaurants or even read newspapers. Tygodnik Powszechny, a Catholic socio-cultural weekly founded in 1945, has become the first newspaper to open its virtual editorial office in Second Krakow. “We decided to create our virtual representative because we think that Second World is a great means of communicating with young people especially,” said Michal Kuzminski of Tygodnik Powszechny.

Its creator, the advertising agency Supremum Group, is adding streets as time goes by. The virtual representation of the weekly’s editorial offices is spacious, bright and modern. Only the editor-in-chief’s office has antiques. Historic covers of the newspaper decorate the walls.

Enlarged covers and selected articles from Tygodnik Powszechny hang on the walls of the main editorial office. Visitors can read them.Soon visitors will be able to obtain access to the virtual archives of the weekly, which have the same material as the real archives. How much virtual visitors will have to pay to gain access to old articles is being discussed.Whatever price is settled on, visitors will pay in Second Life’s currency, the Linden dollar.

The exchange rate right now is $1 per 270 Linden dollars. Apart from reading selected articles, visitors to the virtual editorial offices can see pictures of some the newspaper’s most influential contributors, have a free cup of coffee or chat with newspaper employees. In the future Tygodnik will organize virtual meetings with key newspaper staff – an opportunity many virtual visitors say they want.

Michal Kuzminski, whose name in Second Krakow is Kuzmin Thorne, asks visitors to the real newspaper whether they would like to talk with newspaper representatives. Most like the idea. “A dialogue with readers has always been one of newspaper’s most important objectives,” Kuzminski said. “Second Life has enabled us to conduct the dialogue very easily.”The virtual editorial office’s creators want to make it attractive for foreigners as well as Poles.

They are preparing English versions of some of the most interesting articles. Tygodnik Powszechny is only the second Polish news operation in Second Life. More and more companies – media and otherwise – are opening virtual offices in Second Life, however. The more than 9 mln visitors to this virtual world spend almost $2 mln a day on real-world purchases, Second Life research shows. That has made Second Life a great place for marketers to consider touting products.

The virtual world is becoming more and more remarkable. For example, the business-information provider and news agency Reuters has started a service devoted only to the virtual world. The Linden dollar fluctuates hourly like real currencies, and Reuters’ Second Life Bureau monitors the ups and downs. Other prominent communications organizations with a presence in Second Life are the American television network NBC and the conglomerate AOL.

The growing number of Second Life users shows that a virtual world is much more than a marketing platform. Visitors say they can make their dreams come true much easier than in reality.

They also stress that virtual living is easier than real life. Tygodnik Powszechny, the voice of liberal Catholics in Poland, has been influencing public opinion for more than 60 years. During Communist era it was the only legal opposition paper. In the 1980s it played an important role in the peaceful transformation of Poland. These days the readership of Tygodnik Powszechny is limited to a small group of intellectuals. It hopes its Second Krakow presence allows it to attract new readers, especially younger ones.

“We decided to open an editorial office in the virtual world because we want to keep up with the times and have a dialogue with younger people,” Kuzminski said.The seat of the virtual editorial office of the weekly was created by Krakow’s Supremum Group advertising agency, the author of the Second Krakow.