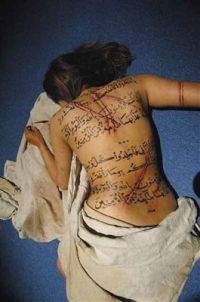 Six films by and about Theo van Gogh, the murdered Dutch director, actor and writer, will be shown September 7-12 at Kino Pod Baranami (Rynek Glowny 27). Audiences will have the chance to see van Gogh’s film debut as well as the later works which made him notorious in his homeland.

The most famous of the films is “Submission,” which in just 11 minutes tells the stories of five abused Muslim women. While background voices recount the stories, the camera focuses on their naked bodies painted with verses from the Koran. The film was perceived by many members of Dutch Muslim community as a blasphemous attack on their religion. Both van Gogh and Ayaan Hirsi Ali, a former member of the Dutch parliament who wrote the script for “Submission” (a translation of the Arabic word “Islam”) and narrated the film, received death threats after the film was released.

Then on November 2, 2004, van Gogh was shot to death by Mohammed Bouyeri, a radical Islamist. The slaying led to demonstrations as well as several arsons of mosques and churches in Holland. On Friday, “Submission” will be the first film shown in the cycle followed by “Luger,” van Gogh’s version of “film noir” and his official movie debut. On Saturday, “Blind Date,” a story of a bar romance narrated by a bartender, will be shown.

On Sunday, the cinema will screen the thriller “Baby Blue,” and on Monday, “Cool!” ? an ironical comment on violence and criminality among Dutch lower-class youth. The last two days of the program will bring “06/05” and “Have a Nice Weekend, Anyway.” The first film is van Gogh’s version of the assassination of his friend, radical politician Pim Fortuyn, while the latter is a documentary on his own death completed in 2004.