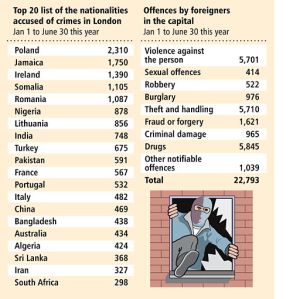 London’s Metrpolitan Police force revealed startling crime figures between January and June 2007. The Daily Mail reported that foreign citizens commit more than one out of five crimes in London. Foreign nationals have been charged with committing 22,793 crimes. Statistics show that a total of 106,678 arrests were made for severe offenses. Britons were charged with carrying out 82,459 crimes with another 1,426 committed by persons of “unknown” nationalities, leaving foreign nationals responsible for the remaining offenses. Of those committed by foreign citizens, Poles carried out the highest number of crimes.

Poles were charged for 2,310 crimes: 583 violent crimes, 32 sex offenses, 201 burglaries, 635 robberies and 626 drug offenses. The figures reflect that about one in ten crimes was carried out by Poles, about 2.1 percent of all crimes committed in London.Polish offenders were followed (in order of most to least offenses) by Jamaicans, Irish nationals, Somalians and Romanians, accused of having committed over 1,000 crimes.

Poland, Ireland, Romania, Lithuania, France, Portugal and Italy are the seven EU member states with unrestricted travel to Britain, a point noted on a list of 20 nationalities responsible for the highest number of offenses. Half of the crimes by Italian and French nationals were drug related; the Irish (with 403 offenses) were charged with the highest number of burglaries; Romanians, with severely restricted working rights in the UK, were mostly charged for theft or handling (695 offenses).

Gazeta Wyborcza daily noted that so many crimes are committed by Poles because tens of thousands of Polish workers have been moving to the British capital during the last few years.

The Polish community makes up a noticeable percentage of the city’s inhabitants. According to the Office of National Statistics Data, foreigners make up 31 percent of London’s inhabitants, but they commit 20 percent of overall crime. The consulate in London is aware of Poles being frequently detained by city police. “Local authorities must inform us of arrests within three days,” said Consul Michal Mazurek.

He concedes that the number of Poles detained in Great Britain is quickly growing. According to data from the Polish Ministry of Foreign Affairs 1,340 people were arrested in 2006. British prisons held 252 Polish inmates in December 2006. The majority of offenses are concerned with loud behavior, store thefts and drunk driving. “More serious crimes also occur, but this makes up a minority of offenses,” informed Consul Mazurka. “Poles are not associated with delinquency here. They are taken rather as hard workers who are earning money honestly.”