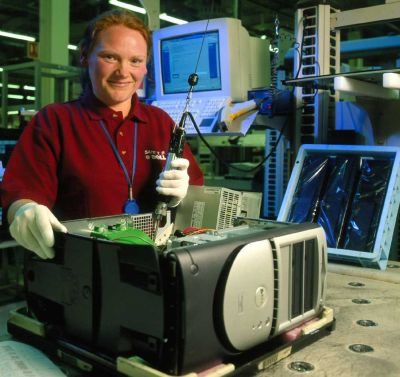 Four hundred Poles who will begin working in November at a new Dell Computer factory in Lodz have begun training at Dell’s factory in Limerick, Ireland. The trainees are from a number of departments, including the production line, quality and material control and administration, the Polish Press Agency (PAP) reported. When it announced the opening of the plant a year ago, Dell said it needed more capacity to meet growing demand for its products worldwide and it wanted a base from which to expand into Central and Eastern Europe.

Dell’s decision to locate a facility in Lodz also is aimed at taking advantage of lower labor costs, property costs and production costs in Poland. The country also has a well-educated work force, analysts say.The factory will produce mainly notebook computers such as Latitude and Inspiron. Lodz, in central Poland, is one of the country’s most attractive investment locations.

It is a large, rapidly developing industrial, economic, administrative and educational center. Dell will hire about 1,000 workers in Lodz initially. In the next three years the number will grow to 3,000. The Round Rock, Texas-based company is putting 200 mln euro into the factory. Companies that are expected to work with Dell will invest an estimated 53 mln euro in the Lodz area, analysts say.

Lodz will be the most modern Dell factory in the world. The company will sell its products and services worldwide. Entrepreneur Michael Dell founded the company in 1984. It has had enormous success with a simple formula: selling computers directly to customers rather than using middle men such as retailers. Selling direct means Dell can charge less for its products. Dell has a regional headquarters in Bracknell, England, for Europe and the Middle East.