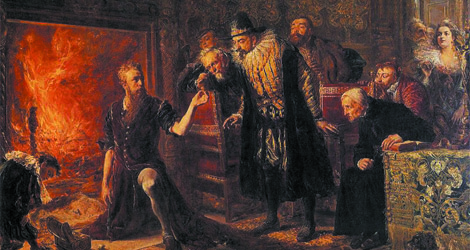 The 19th century Polish painter Jan Matejko is renowned for his monumental canvases glorifying Polish national identity, but did he also include a multitude of hidden symbols and images in his work?

This is the claim being made by amateur historian and Matejko hobbyist, Barbara Walczak. She believes she has uncovered a Polish ‘Da Vinci Code’ in the form of dozens of figures and other images subtly depicted in the swirls and dabs of the master’s brushwork.

Ms Walczak spoke to the Krakow Post about some of the most accessible coded images she has found.

“In Alchemik Sędziwój i król Zygmunt III [The Alchemist Sędziwój and King Sigismund III] we can see a woman behind bars depicted on the king’s robes. A lump of gold in the same painting has letters written on it that we can read using a magnifying glass,” Ms Walczak explained.

“In another painting, Piotr Włost sprowadza Cystersów do Polski [Piotr Włost welcomes the Cistercians to Poland] we can clearly see a woman, who I believe is his wife, depicted in Włost’s beard. She was an historically vital element of the story told by Matejko, but for some reason, is not among the main characters in the picture,” said Ms Walczak.

And why did Matejko resort to this kind of subterfuge? “Men’s and women’s figures, faces and busts are all there to be decoded. My opinion is that Matejko wanted to educate his audience about the multitude of connections between Polish and European history and legends. But he played quite a trick on those who don’t think as he did – leaving his message only to those who see beyond what the naked eye sees. I believe Leonardo da Vinci and Michelangelo did the same thing,” explained Ms Walczak.

Professional art historians are unconvinced by Ms Walczak’s claims. “Yes, I see a woman’s figure in the photo of The Alchemist,” admits a university art historian, who wishes to remain anonymous, “But what we see in the photo is a product of form, light, shadow and the aging of the paint creating images not intended by the artist. If the same things are visible in the actual painting or in a high-resolution photo, it might be a reason to initiate research,” he said.

But specialists at the Jan Matejko House Museum in Krakow, to whom Ms Walczak turned for help, have declined to analyse Matejko’s works for hidden figures.

“Art interpretation is a very strictly defined task,” said Barbara Ciciora, custodian of the Jan Matejko House Museum. “Its methods are more complicated, but similar to interpreting poetry. We ask the question: ‘What did the painter want to say?’ and we look for answers in what the painter said about his work and in biographical sources. Not every detail in a painting carries equal weight when it comes to the meaning and content.”

Experts from the Jan Matejko House Museum explain that Matejko’s correspondence and other source materials allow us to establish the painter’s psychological profile well.

“Matejko allowed himself some symbolical elements, but they were conventional and visible to the naked eye. There are no substantial grounds for us to believe that there are elements hidden from the spectator’s eye in Matejko’s paintings,” said Ms Ciciora.

Walczak explains that she was also sceptical when she first heard the idea. “My friend sent me a remark about a possible figure of a devil in some robes. I saw no devil there, but I did see something totally different and in a different place. This puzzled me and started my two-year long study of Matejko’s works. I plan to publish a book detailing my discoveries, along with my explanations.”

The Gallery of 19th Century Polish Art in the Sukiennice is curently exhibiting one of Jan Matejko’s most famous canvases: Rejtan – The Fall of Poland. The show, which includes interpretations of Matejko’s iconic images by contemporary artists, continues until May 27.