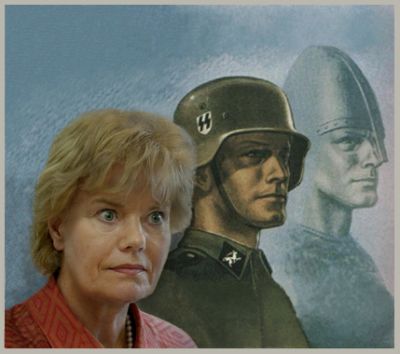 A poster showing the conservative German member of parliament, Erika Steinbach, alongside a Nazi officer has escalated the conflict between Poles and the ethnic Germans who once lived in what is now Polish territory. The Polish Press Agency (PAP) reports that the Polish Trustees, an organization opposed to compensating Germans expelled from Eastern Europe after the defeat of Nazi Germany during World War II, placed an illustration of Erika Steinbach, head the German Union of Expellees, on the poster alongside a World War II Nazi officer and what appears to be a Teutonic Knight.

The poster was created to counter the activities of the German Union of Expellees and the Prussian Trustees. Specifically, this poster protests the celebrations organized August 18 by German expellees commemorating their homelands prior to World War II on what is now Polish territory.

For seven years, Erika Steinbach has been lobbying for a permanent museum-memorial documenting the fate of the expelled Germans. Referring to the expellees as “victims,” Steinbach proposes a Center Against Expulsions in Berlin, preferably close to the Holocaust memorial.

Also for seven years, some Poles have been campaigning against such a memorial, arguing that the project seeks to turn occupiers into victims and vice-versa. According to estimates, 13 to 16 mln ethnic Germans were expelled from Nazi-surrendered territories after the war, mainly from western Poland.

The latest incidents have done nothing to help Polish-German relations, and some worry about a return to the historic German and Polish stereotypes of past confrontations. Germans have threatened to sue the Polish Trustees for slander in connection with the poster. Dorota Arciszewska, the head of the Polish Trustees, said no law was broken and the organization was simply exercising its right to freedom of expression.